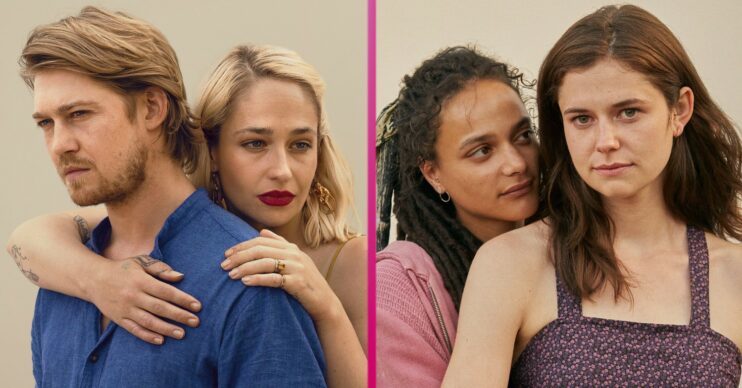 Conversations With Friends on BBC3: How many episodes is it, is it like the book, and where is it filmed?

The cast is SO hot!

Normal People was THE lockdown watch, and deserved every bit of the hype – and now comes the next BBC adaptation of Sally Rooney’s Conversation With Friends.

It’s sexy, thought-provoking and has a cast so hot you could get a suntan from it.

So what’s the plot, how many episodes is it, and how can you watch it?

What is Conversations With Friends on BBC about?

Conversations With Friends introduces us to university student Frances, who seems to live in the shadow of her super-confident best friend Bobbi.

Frances is smart, beautiful and witty, but struggles with her confidence and often can’t make herself heard.

Frances and Bobbi used to date, and we’re not sure at first if they are still in love with each other.

The pair perform spoken-word poetry together in Dublin.

That’s where they meet well-known writer Melissa, who is drawn to the pair and introduces them to her husband (big mistake).

Nick is an actor, and the chemistry between him and Frances is palpable.

To tell you more, would be to spoilt the magic.

But the unfolding storyline is one of forbidden love, sexual chemistry, friendship tested, and a woman on a journey of self-discovery.

And, yes, it has lots of sex in it, just like Normal People before it!

How many episodes is Conversations With Friends?

Conversations With Friends is 12 episodes in total.

And we guarantee they’ll fly by so fast you’ll want to watch them again straight away.

Each part is 30 minutes long, so that’s six hours of sex, sadness, sun and relationships you’ll be glad you spent staring at the telly.

Conversations With Friends is based on the bestselling book of the same name by Sally Rooney.

It was Sally Rooney’s first published novel, despite her second book Normal People being adapted for TV first.

Conversations With Friends was published in 2017.

At the time, Booklist called it: “A smart, sexy, realistic portrayal of a woman finding herself.”

Sex and the City star Sarah Jessica Parker said she had “read it in one day”.

The Sunday Times named it on their Top 100 Novels of the 21st Century.

Who is in the cast of the BBC’s Conversation With Friends?

The cast of Conversations with Friends is as sexy as you’d expect from a Sally Rooney adaptation.

It’s her first acting role, but you wouldn’t know it.

He’s perhaps most famous for playing Bob Cratchit in TV drama A Christmas Carol, or Robert Dudley in the 2018 film Mary Queen of Scots.

She recently played Hunter C-20 in the Marvel series Loki, and Jessica Hyde in the US version of hit British drama Utopia.

Jemima Kirke, who plays Melissa, is probably the most famous face in the cast.

She played super-sexy Jessa in the HBO comedy Girls, and recently starred as Hope Haddon in Sex Education.

Where is Conversations With Friends filmed?

Conversations With Friends is set and filmed in Dublin.

We see Frances and her ex-girlfriend Bobbi in front of the classical 18th-Century front gate and in the grounds.

Nick and Melissa’s elegant home is in Monkstown, on the coast.

Melissa takes Frances and Bobbi swimming at the beach at Seapoint in episode one.

Frances’ own flat is in the centre of Dublin, filmed on Hardwicke Street.

We see her on the streets nearby, including Blessington Street, as well as in the Temple Bar area and on Lower Abbey Street, along with cafes and bars in the city.

Filming also took place in the Northern Irish capital, standing in for Dublin.

Scenes were shot across the city, with crews at work on Ormeau Road and on Botanic Avenue.

The interior of Sweet Afton bar in the Linen Quarter was used for Frances’ meeting with Valerie in episode nine.

Frances watches Nick perform in Cat On A Hot Tin Roof in the historic Lyric Theatre on Ridgeway Street.

Episode four and five of Conversations With Friends were filmed in Croatia, on the island of Hvar.

Filming also took place in the town of Stari Grad (Old Town), on the north coast.

How can I watch Conversations With Friends?

Episode one will air at 10pm.

All 12 episodes will be available on BBC iPlayer from then on.

How can I watch Sally Rooney’s Normal People?

Normal People, based on Sally Rooney’s novel of the same name, is still available to watch on iPlayer.

All 12 episodes of Normal People remain on the BBC’s catch up service.

Of course, Daisy Edgar-Jones and Paul Mescal star as Marienne and Connell in the beautiful love story.