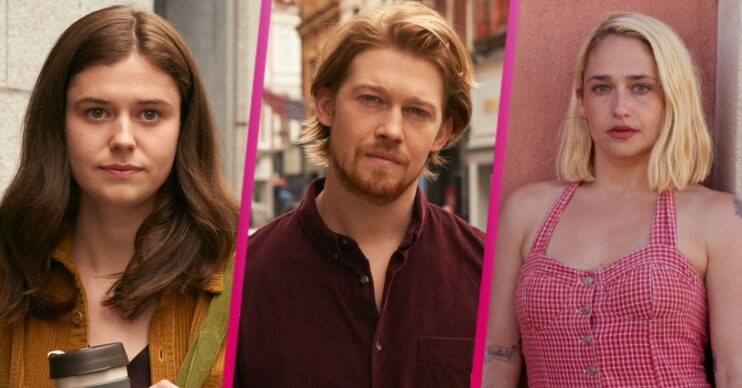 Conversations With Friends on BBC Three: Who is in the cast and how old are they?

The 12-part series, which starts on Sunday May 15 2022, stars a beautiful and talented group of actors some of whom you’ll recognise…

But the leading lady won’t be so familiar.

So who is in the cast of the much-anticipated BBC Three drama Conversations With Friends?

Who plays Frances in the cast of Conversations With Friends?

Alison Oliver portrays university student Frances in the cast of Conversations With Friends.

Frances is smart, beautiful and witty, but struggles with her confidence and often can’t make herself heard.

And Cork-born Alison is perfectly cast in the role.

Not least because she’s actually Irish!

She brings the right level of naivety and angst to budding writer Frances.

In the TV series, Frances is 21 years of age but, in real life, actress Alison Oliver is 23.

The show marks the screen debut for the Irish actress.

She graduated from the Lir National Academy of Dramatic Art in Dublin in 2020 and booked Conversations With Friends soon after.

How old is Sasha Lane who plays Bobbi?

Sasha is 26 years old in real life, but playing a 21-year-old in the BBC drama.

She isn’t quite as new to acting as her co-star Alison, but she’s still a relative baby.

Sasha’s been on our TV screens ever since 2016 when she starred as Star in the film American Honey.

She’s also starred as Jane in The Miseducation of Cameron Post, Rose in Hearts Beat Loud, and Lindsay in After Everything.

Sasha has appeared in the films Daniel Isn’t Real and Hellboy.

The Texas-born actress is also known for her performance in Lewis Capaldi’s Before You Go official video.

She recently played Hunter C-20 in the Marvel series Loki, and Jessica Hyde in the US version of hit British drama Utopia.

Who plays Nick Conway in Conversations With Friends cast?

The six foot actor is perhaps most famous for playing Masham in the award-winning film The Favourite, opposite Olivia Colman.

He’s also starred as Robert Dudley in the 2018 film Mary Queen of Scots, and Bob Cratchit in the 2019 TV drama A Christmas Carol.

More recently, he’s portrayed Lawrence Stirling in the film The Last Letter from Your Lover, and Max in The Souvenir: Part II.

He’ll soon play Lord Sebastian Flyte in the upcoming TV adaptation of Brideshead Revisited, a role we think he was born for.

He’s said to be the inspiration for her song London Boy, and he even co-wrote her latest album Folklore.

Jemima Kirke, who plays writer Melissa, is probably the most famous face in the cast.

Of course, Girls fans will know her as super-sexy Jessa in the HBO comedy.

Before that, she played The Countess in the film Sylvie’s Love, Adelaide in the TV series Maniac, and Odessa in All These Small Moments.

In 2017, she starred in Zayn’s music video for the single Dusk Till Dawn featuring Sia.

Jemima is 37 years old, and plays 30-something Melissa.

Dennis is an alcoholic and lives alone in Ballinascaul.

He supports Frances financially, but the two of them struggle to connect emotionally.

Derry Girls fans will recognise Tommy as Gerry Quinn in the C4 comedy.

The 52-year-old Irish star is also well known for hosting The Tommy Tiernan Show from 2017.

The stand-up comedian has also written and starred in his own TV film, entitled Tommy Tiernan: Crooked Man.

Who else stars in the cast of Conversations With Friends?

Paula separated from her husband Dennis nine years ago.

Philip is a friend of Frances and Bobbi’s who gets Frances her summer internship.

Brassic’s Tadhg Murphy – who lost his eye at 13 in a tragic accident – stars as Derek, an old friend of Nick’s and part of their Dublin social circle.

She’s a singer, too, which explains the beautiful scene in episode four…

She’s a Kiwi actress, aged 55, who is probably most famous for starring opposite Ewan McGregor in the 1994 film Shallow Grave.