ITV2 have decided to air the movie Contagion tonight (March 26) at 9pm.

As the real world struggles to deal with the devastating coronavirus pandemic, the questionable film choice has raised a lot of eyebrows... 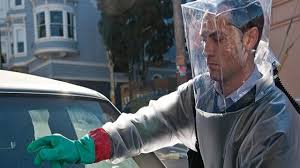 What is the Contagion movie about?

Steven Soderbergh's 2011 movie Contagion tells the story of a deadly pig and bat-borne virus that starts off in China.

American Beth Emhoff contracts the disease after shaking hands with a chef in a Macau casino.

Once her stay in China is over, she flies back to America and unknowingly becomes a super spreader – even giving it to her son Clark.

They both die from the disease.

Beth's husband Mitch contracts the deadly virus too but soon realises he is immune and is put into quarantine.

As the disease spreads at an unmanageable rate across the globe, killing millions, health officials race to find a vaccine.

Once they are able to create one, numbers are limited and are distributed by a birth date lottery.

When riots break out, the scientists begin to distribute placebo vaccines.

What's the reaction to Contagion airing on ITV?

There has been a huge backlash at the decision to air Contagion while the world battles the coronavirus outbreak.

Many have been taking to Twitter to criticise ITV and have urged the broadcaster to reconsider its film choice.

Another then added: "What joker at ITV thought it was a good idea to have the film Contagion on tonight? #covid19UK."

Moments later, a third tweeted: "ITV 2 tonight the film at 9pm is Contagion...wtf are they thinking? #itv #CoronavirusLockdownUK #covid19UK."

A fourth wrote: "Might want to cancel Contagion on itv2 tonight. Odd choice."

Despite the outrage from many Brits, some encouraged others to watch the movie when it airs given the haunting comparisons between what happens in the film and what is going on in the world right now.

"Contagion is coming on tonight at 9pm on itv 2 . You all need to watch it , it’s basically about a pandemic , very similar to Whats going on now," one Twitter user commented.

Who is in the cast of Contagion?

Gwyneth made a reference to her role in the film last month on Instagram.
After posting a picture of herself wearing a protective facemark, she wrote: "En route to Paris.
"Paranoid? Prudent? Panicked? Placid? Pandemic? Propaganda? Paltrow’s just going to go ahead and sleep with this thing on the plane.
"I’ve already been in this movie. Stay safe. Don’t shake hands. Wash hands frequently."
Share Share Share