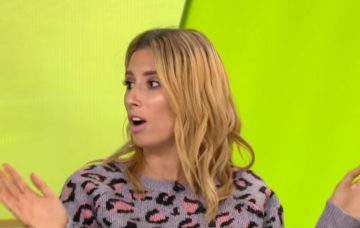 It seems like some Strictly viewers can’t tell the difference between TV personalities from Essex called Stacey.

Reacting on Twitter to the messages of congratulations being sent her way, Stacey (Solomon) joked: “I believe these are for you @StaceyDooley.”

“I did consider keeping them to myself but it didn’t feel right…” she continued, attaching a screengrab of well-wishers send her their best to her by mistake.

Among the misdirected messages was one from a viewer who detailed how a young fan she knew hoped to appear on the dance show himself, inspired by the Stacey who has never performed on it.

“He now also plans to appear on Strictly and has decided is partner will be Stacey Solomon,” the tale concluded.

I believe these are for you @StaceyDooley 😘 I did consider keeping them to myself but it didn’t feel right… Congratu – bloomin – lations!!!! Ballroom queen 👸🏼 You thouroughly deserved it! 💛💛💛 pic.twitter.com/DUYTGQjfb1

Another praised her as a “true queen”.

Former I’m A Celebrity winner Stacey S is regularly tipped to feature on Strictly when the rumour mill starts offering up names of potential participants.

But she yet to follow in the dance steps of fellow X factor standout Alexandra Burke and cross over to the Beeb to take part in their primetime light entertainment show.

In 2017 she revealed she would be willing to sign up for the series for one particular reason – even though she doesn’t rate her own boogying skills.

“I’d never say never, I would do it for probably just for the costumes but I’m a terrible dancer,” Stacey S told OK! Online.

“I wonder if you get to keep them, that would be make or break for me.

“It would be so rubbish to get to wear all of those clothes and not get to keep them!”

Stacey D and pro partner Kevin Clifton beat out celeb contestants Ashley Roberts, Faye Tozer and Joe Sugg in Saturday’s final despite ending up bottom of the leaderboard after the judges’ vote.