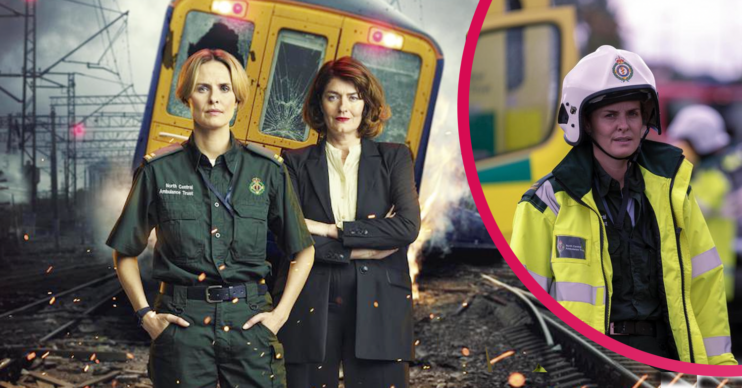 Compulsion on Channel 5 cast: Yes, that IS Hayley Mills playing a baddie

Channel 5 is really bringing some brilliant dramas with fantastic cast names to the table this year, Compulsion being the newest.

Airing over four nights from Tuesday April 12, Compulsion follows Jenny, a PTSD sufferer who uses gambling to cope with her trauma.

What is Compulsion on Channel 5 about?

But Jenny’s secret habit has left her on the brink of losing everything and everyone she cares about.

She also owes a lot of money to some very dangerous people.

Then she meets Sasha, a good samaritan who offers Jenny a way out. But is Sasha everything she seems? We’re gonna have a guess and say no, probably not.

Read more: Deadline on Channel 5: Who is in the cast and where was it filmed?

Jenny’s a paramedic who, after witnessing a fatal train crash, has struggled to cope. She’s suffering panic attacks and they’re getting worse.

She’s also keeping her mental health battle hidden from her husband and co-workers.

So Sasha’s offer is very tempting, but the stakes are so high, it could cost Jenny her life.

Who is in the cast of Compulsion?

Like the other Channel 5 dramas we’ve loved this year, The Teacher, The Holiday, Deadline, there are some faces you’ll certainly recognise in the cast.

She was most recently seen alongside Sheridan Smith in BBC One drama, Four Lives, which dramatised the horrific murders of Stephen Port.

In 2021, Leanne starred in Channel 4 drama, Close To Me, about a woman who forgot an entire year of her life after a fall.

Line of Duty fans will know Leanne from series 3 where she played PC Jackie Brickford.

She’s also had roles in Cold Feet, Carnival Row and Black Mirror to name a few.

Leanne is the niece of Pete Best who was The Beatles’ drummer before they were famous.

What has Leanne said about her role?

Leanne says about her role in Compulsion: “The Compulsion script is beautifully written, so that on the surface Jenny is a woman who should be fine, everything should be okay. She has a husband that really loves her, she adores her daughter and she has a job that she’s really excelled in. She has a nice home and she has good friends. There is an allusion to some mildly compulsive behaviour in her past, but actually she’s managed to make a really lovely life for herself.

“Then she’s involved in a train crash and she becomes utterly unable to manage her own behaviour and her compulsion to gamble. One of the difficult things about addiction is that the behaviour of the addict has such far-reaching consequences and sometimes it can make it really difficult to feel compassion for somebody who’s behaving in such a way. It’s really fascinating watching her grapple not only with what she’s doing, but also with who she is as a person. She has PTSD, and there’s a huge amount of behaviour that comes along after a traumatic event like that as your nervous system tries to deal with it.”

Leanne is also excited about being able to use her natural Scouse accent in the drama.

The Split fans will know Anna Chancellor as awful Melanie Aickman in the BBC One drama. Melanie is currently causing trouble for Hannah and Nathan Stern in the third and final series, acting as Nathan’s divorce lawyer while doing PR for his new, pregnant girlfriend, Kate.

Anna’s also currently starring in BritBox drama, Hotel Portofino which made its debut this year.

Like Leanne, Anna has a massive acting CV and has starred in The Crown, Death in Paradise, Spooks and The Hour amongst others.

Sasha Santoro, Anna’s character in compulsion, spots Jenny having a panic attack on a train. She steps in to play the good samaritan and also manages to take Sasha’s phone when she leaves it on the train. A fast friendship builds between the pair, but is Sasha all she seems?

What has Anna said about playing Sasha?

Anna says of her role: “I [also] thought that Sasha would be a really fun part to play. I like the fact that you think she’s one thing and then she turns out to be something else, I thought that great. It was a really great job for me, I really enjoyed the experience. Leanne is an amazing actress, who is really bright and fun to work with, we had a similar approach and a mutual respect. And I really loved our director too, because she used to be an actress, so she understands the things that are important to me.”

She also spoke about playing a character who’s not what she seems: “I think that when people invent these kinds of stories, they believe their own lies. So I didn’t have to play her as being duplicitous. She thinks she’s totally within her rights to behave as she does. She’s got a vendetta and she’s fuelled by self-righteous anger. But you do slightly wonder what she’s been up to before, that she finds lying so easy! It comes naturally to her and she’s quite enjoying it, you kind of wonder where her life is going.”

TV and film legend Hayley Mills really needs no introduction as a Compulsion cast member. She’s been acting since she was a child. Those of us of a certain age will know her for playing Pollyanna, in the film of the same name, and for playing twins in the original version of The Parent Trap.

In Compulsion, Hayley plays Connie, a rather nasty loan shark. Although, tbh, we’re yet to see a nice one in a TV drama. Connie is putting a lot of pressure on Jenny, adding to her stress and anxiety.

It’s quite a different role than we’re used to seeing Hayley in. She said about Connie: “She’s ruthless and she can’t empathise with other people’s pain. She’s a sociopath but she doesn’t think she is. Her focus and her motivation is just to make money, and she completely believes that she’s providing a service, and that people wouldn’t be able to get the money they needed from the bank at this short notice, but she will provide it. She doesn’t have any feeling that what she’s doing is morally reprehensible and that she’s putting the screws on people in a way that is just adding to the pain and misery of their situation. She thinks it’s all completely justified because if it wasn’t for her, they wouldn’t have the money in the first place. So, there is an area of her brain that hasn’t been activated properly!”

Compulsion cast member Danny plays Jenny’s husband, headteacher Chris, who is unaware of how much she’s struggling with addiction and PTSD.

Chris is, rightfully, wary of Jenny’s sudden new friendship with Sasha though and is hurt that his wife seems happier talking to a virtual stranger about her emotions, than him.

He’s also worried that Jenny went back to work too soon after the train crash.

Danny will be familiar to TV fans for his roles in Strike and Road Kill.

Ali is Jenny’s best friend and, along with Chris, thinks her pal has taken on too much by returning to work so quickly.

She worries about the sudden appearance of Sasha in Jenny’s life.

Krissi has previously starred in Counterpart and Innocence.

Lesley is Jenny’s boss at the ambulance service. She’s one of the few people who doesn’t think Jenny’s return to work is premature and even offers her a promotion.

But how will she react when Jenny agrees with Sasha’s plan to make money?

Read more: The Holiday on Channel 5: That twisted ending explained and will there be another series?

Will you be tuning into Compulsion? Head to our Facebook page @EntertainmentDailyFix and let us know.