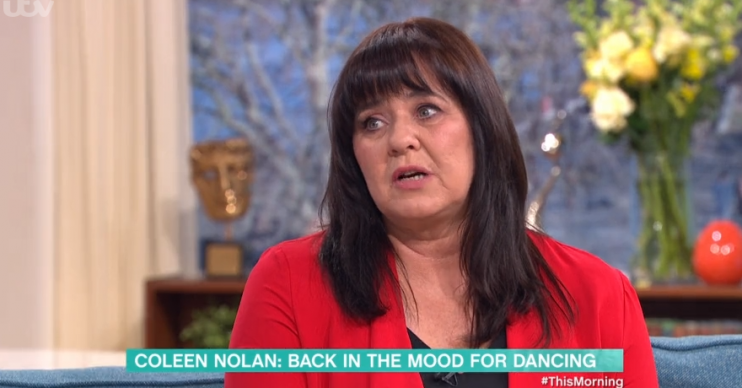 Coleen Nolan jokingly shut down Phillip Schofield over a remark about her being single on This Morning.

The Loose Women star appeared on Tuesday’s show to discuss Thunder Girls, the play she is currently in, and her upcoming show on a cruise with her sisters.

Speaking about heading out to perform with her sisters, Coleen said: “We haven’t had that moment in all those years to just have the four of us there and sing.”

Yes I’m Coleen and I’m single and ready to mingle.

Phil added: “But you’re on a cruise ship with a captive audience,” to which Coleen said: “Yes I’m Coleen and I’m single and ready to mingle.

Coleen has been single following her split from husband Ray Fensome in 2018.

The star recently revealed she hasn’t had sex in three years and claimed her “libido has died”.

Speaking to the Mirror, Coleen said: “In my mind and my heart now, I just don’t see the point of marrying again. I don’t even know if I want to fully live with someone ever again.

“If I was to miss anything, it would be the intimacy. I’m super romantic, so I miss the romance. Kissing, hugging, sitting down watching a film together – but the actual act, no.

“The Loose Women told me it was the menopause, that it can make you lose your libido. Well, mine’s just died, it’s left home.”

Coleen also insisted she doesn’t want a toyboy, adding that she’s “never really been into younger men and it would make me feel old”.

Meanwhile, on This Morning today, Coleen opened up about her new role in Thunder Girls.

She said: “I play the part of Anita, and I can’t go into too much because it gives it away. Anita, basically something really terrible happens to her at the end of her career with The Thunder Girls.

“So they don’t see her again, she literally goes away and they don’t hear from her again for 30 years, they don’t know if she’s alive or dead.

“In the mean time, they’ve been offered this amazing cash opportunity to reunite for this big event. So, one of the girls is trying to get them all together at her house.

“There’s so much past to put behind them, it ended really toxically, so it’s this dinner from hell where they air all their grievances.”