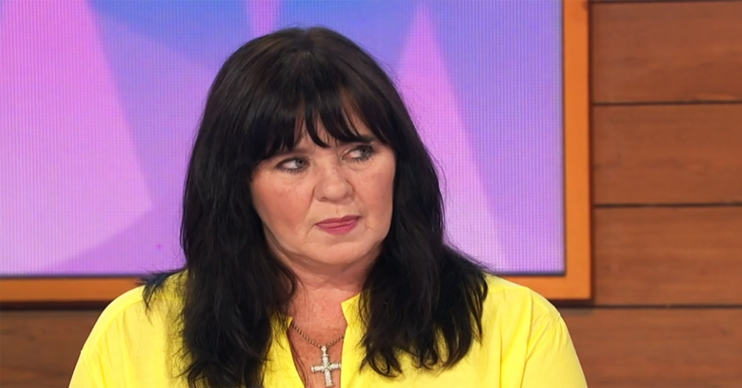 She's been hosting from her home

Coleen Nolan has revealed she was in tears before returning to the Loose Women studio.

The star hasn’t been in the studio for five months and has been a panellist on the programme via video call from her home.

On Monday (July 20), Coleen admitted she burst into tears during the train journey to London.

What did Coleen say?

The singer explained: “It feels lovely to be back and see everyone in the flesh but yesterday, I woke up feeling teary and a bit strange.

“I got on the train last night and cried all the way here.

“I think it’s because all of a sudden I was out of my very secure little bubble and away from everybody I spent five months with.

“[I was] on my own solidly for the first time in five months and going to a hotel.”

'All of a sudden I was out of my very secure little bubble.'

Coleen explains why she felt anxious about coming back to the studio. How are you feeling about going back to work?

Andrea McLean joked: “You know there are mums up and down the country going, ‘what I’d give for five minutes in a hotel.'”

Coleen continued: “That’s what I thought, leading up to it I was thinking, ‘it will be nice, two nights away in a hotel, won’t have to worry about the cleaning and the cooking.’

I got on the train last night and cried all the way here.

“I haven’t been scared of the whole COVID thing, obviously I’ve been doing what I’ve been told to do but I’ve felt quite safe.

“It was only when I stepped out of the bubble where I thought, ‘Oh I don’t know now.’

“Then I get to the [train] station and there were more people there than I’ve seen in five months.”

Coleen added: “I’m fine now, I’ve got a grip. My daughter told me to get a grip.”