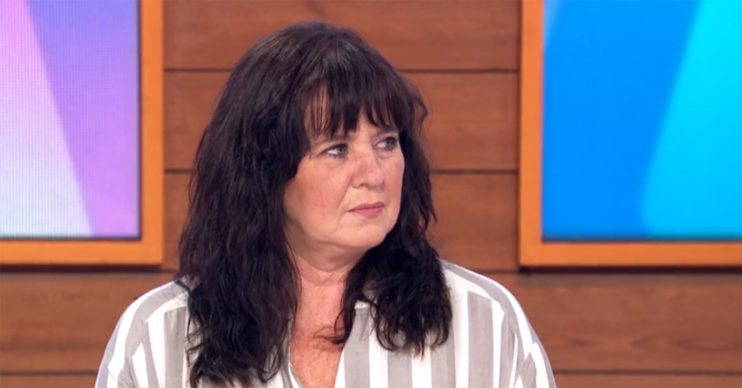 She admits to a 'budding friendship'

Coleen Nolan has revealed that she’s thinking about entering into a relationship with a toyboy.

The Loose Women star, 55, opened up about her conundrum on today’s show (Tuesday Agust 25) and was given the support of her colleagues.

Coleen Nolan made the confession on Loose Women

Mum-of-three Coleen explained to her fellow panellists Michelle Ackerley, Brenda Edwards and Gloria Hunniford that she’s speaking to someone online.

During a chat about a new dating app that specialises in age-gap relationships, she revealed: “I’ve been speaking to certain gentlemen on social media and one of them is 38.

“I’ve said I couldn’t date anyone I could’ve given birth to.

“I’ve got a problem about younger guys because I always question why a 30-year-old would want to be with someone 55.

However, Coleen insisted that this particular new friend ‘feels like an old soul’.

What kind of relationship is Coleen enjoying with her toyboy?

Coleen said their relationship is still only a “budding friendship”.

I’ve said I couldn’t date anyone I could’ve given birth to.

As Brenda looked at her a bit funny, she said that “it’s nice to have a flirt with someone”.

She received support from 80-year-old Gloria, who said: “I just want to say to Coleen, go for it!”

Tragedy hits the family once again

Coleen, who has been married twice before, deserves some happiness after a terrible 2020.

Tragedy once again hit the Nolan family earlier this summer when it was revealed that Coleen’s sisters – Anne and Linda – were both diagnosed with cancer only days apart.

Anne recently appeared on BBC Breakfast to give an update on their progress.

“I don’t want to die. I love my life so much, I love my daughters, my grandchildren, my friends, all my family,” she said.

Linda courageously admitted: “I want to live for as long as I possibly can – I am scared of dying as well. Even though I believe in God, I’m still scared.”