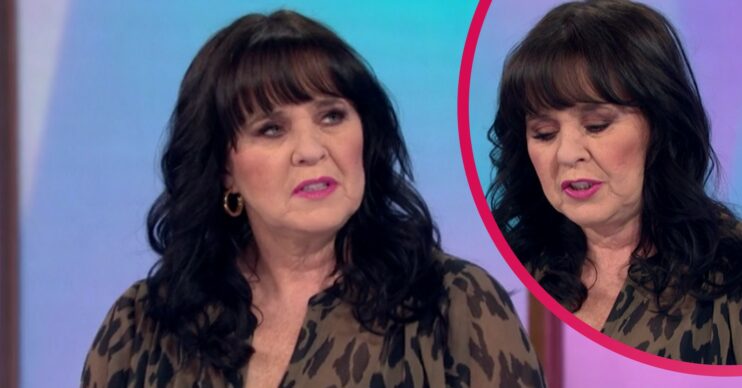 Coleen and her sisters recently lost their beloved auntie

Coleen Nolan has broken her silence on Loose Women following the heartbreaking death of her auntie.

The presenter, 56, lost her beloved aunt Theresa last week after a battle with incurable skin cancer.

Appearing on the ITV programme today (February 7), Coleen opened up on her loss as she reflected on Theresa’s final weeks.

Coleen Nolan opens up on her loss

Turning to Coleen, she said: “Nice to see Coleen back as you weren’t here last week. Sadly, your auntie was very ill and she did pass away.

“Condolences to you and the family – how are you all?”

Coleen responded: “We’re all ok at the moment because when they get to the stage where their time is done, you want them to go to sleep.

“That’s exactly what she did in the end. She was out of pain and we were all there.”

She continued: “The thing about my auntie Theresa was that she was genuinely like a second mum – taking nothing away from my wonderful mother.

“She was my mum’s sister, so when my mum passed away she was the last one of that generation.”

Coleen went on to explain that Theresa was often referred to as the ‘Don’ of the family.

The star added: “She’s just a massive part of your family, so it’s a massive loss. She’s going to be very sadly missed in our family.”

Thankfully, Coleen and her family were able to spend Christmas with Theresa following a stint in hospital.

Viewers rushed to show their support, with one saying: “So sorry for your and your families loss Coleen.”

A second wrote: “Coleen deepest sympathies on the loss of your aunt. My aunt also just passed away on Thursday so I know how it feels sending hugs.”

Yesterday, our Auntie Teresa peacefully passed away, after living with incurable skin cancer for many years.

Teresa was the backbone of our family, the glue that held us together and the only person from our parents’ generation left.

It comes days after Coleen and her sisters shared their devastating news with fans.

Paying tribute to Theresa shortly after her death, the siblings shared a selection of photos of their beloved auntie.

The special tribute was posted on the joint account for Coleen, Anne, Linda, Maureen and Denise.

The group captioned the post: “Yesterday, our Auntie Teresa peacefully passed away, after living with incurable skin cancer for many years.

“Teresa was the backbone of our family, the glue that held us together and the only person from our parents’ generation left. Rest In Peace, Auntie.”