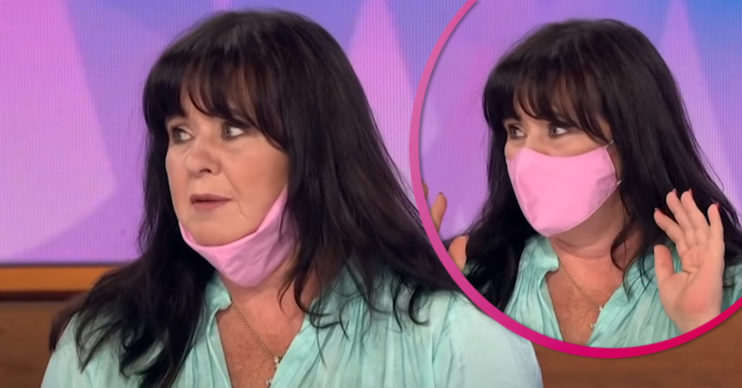 Will you tell those not wearing masks properly to do so?

TV fave Coleen Nolan is mystified at how some people can’t manage to wear their masks properly when out and about.

The Loose Women star admitted she has been tempted to give those who don’t follow the rules a telling off.

Coleen, 55, added she has no fondness for wearing a mask herself as it makes her “claustrophobic”.

Nonetheless, she went on to say how those dropping their masks to cover their chins aren’t doing anyone any good.

She also demonstrated how she wears her own mask during the discussion about face mask flouters.

“I’ve been wearing my mask – and I hate wearing them, I have to say – I feel very claustrophobic,” Coleen said.

I want to tell them: ‘Guys, it’s not coming out of your chin.’

Pulling hers around her ears, she went on to note she has observed how some masks aren’t even covering mouths and noses.

“I’ve been walking around like this, doing my bit – and passing people who do this,” she continued, readjusting her mask so it went under her chin.

Coleen despaired: “Hundreds of people wearing a ‘beard mask’. I want to tell them: ‘Guys, it’s not coming out of your chin.'”

She also speculated some offenders were just being truculent with their actions.

Coleen added: “They’re like: ‘I’ll wear a mask because I have to, but I don’t really want to.'”

Host Andrea McLean asked Coleen whether it might be the case that those people were had their masks down because they weren’t inside shops.

But Coleen confirmed it wasn’t just people outside who had readjusted their masks so they were pointless.

She went on: “No, because I’ve seen people in the local supermarkets. Yesterday I saw people there without masks, or wearing them like this [under the chin].

On Twitter, viewers had a mixed response to Coleen’s comments and the issue of wearing masks.

“I can start to feel myself lose control when I wear a mask,” one person reflected.

“But I wear one to protect myself and others. It’s uncomfortable and irritating, but I do it because it’s the right thing to do.”

“I only put it on just before I enter the shop,” one social media user confessed.

And someone else claimed: “Please remember there will be vulnerable people unable to wear a mask. Making them feel like they are unable to go out is not acceptable and they shouldn’t be shamed.”

Others questioned whether wearing a mask would help at all.

Another person admitted they would be reluctant to tell those wearing their masks correctly to pull them up.

They said: “I would love to tell people to wear their mask but I truly believe it would cause arguments. I’ve witnessed this also on public transport.”

But someone else said: “Even though they aren’t compulsory until Friday I have already spoken out to non-mask wearers and I will continue to do so more after Friday.

“Being responsible isn’t that difficult.”