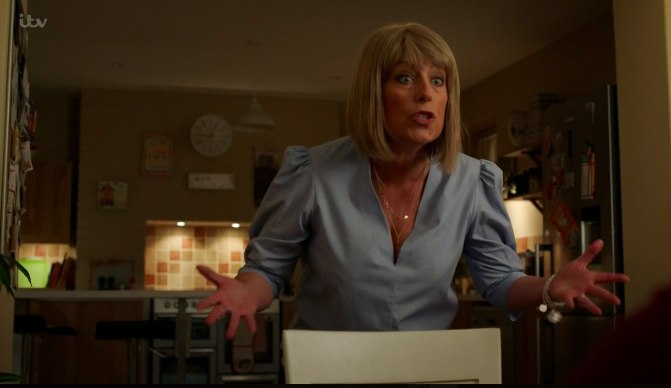 How much more misery can Jenny Gifford (Fay Ripley) cope with? She’s recovering from cancer, the chemo made her hair fall out, she’s going through the menopause, her mother has just died and now her husband Pete (John Thomson) is getting far too close to Sandra (Claire Keelan), an attractive widow he met while on jury service.

In Monday’s episode of Cold Feet, Jen and her elder sister Sheila (Sally Rogers) were going through their late mum Barbara’s belongings.

The women, usually at each other’s throats, had agreed a truce to help them cope with their mother’s death.

They found Barbara’s last will and testament, written eight years ago. “If she’s left everything to the cats’ home we’re going to bury that in the garden,” joked Jenny.

She is devastated to discover that her mother’s final wishes were to give everything to Sheila. Understandably Jenny was upset. “She could’ve left me something,” she confided in her husband Pete. “It hurts so much.”

Pete tried to reassure his wife that Barbara would have had a good reason to ignore Jenny. “I know she loved you and our kids, she might have written that will out of guilt,” he told her.

Sheila initially offered to give Jenny half – or so Jenny thought. But when Jen refused to take it, Pete told her not to “punch a gift horse in the mouth”.

Jen then changed her mind and asked to have her share – and Sheila refused. The sisters eventually came to an agreement, but they realised their relationship works best if Sheila returns to Canada and they put thousands of miles’ distance between each other.

Pete and Jen’s long marriage was also going through a rocky patch.  The couple were sleeping in separate beds. And it’s not just because Jen was going through night sweats and Pete snores. Jen admitted that she’s gone off sex.

Pete pleaded with her: “It’s been ages, at least a couple of Prime Ministers ago.” But Jen reminded him: “I’ve had cancer and treatment, and my mother’s died.”

Eventually she laughingly suggested that if it meant that much to him, he could go and “find it elsewhere”. But Pete took this as getting Jenny’s blessing and an opportunity for a “free pass”. He went straight round to Sandra’s!

Will Pete give into temptation? (ITV)

In a tense scene on Sandra’s doorstep, she told him:’ I’m not trying to steal you away from your wife. I wouldn’t do that. But I’m lonely, and if you’re here it means you’re not getting something from her, so maybe we have something we can offer each other.’ Pete crossed the threshold and ended up in Sandra’s bedroom. What was he thinking?

Many Cold Feet fans took to Twitter to simply post: “Ohhh Pete!” One viewer, referring to another storyline that Adam (James Nesbitt) was thinking about taking on an allotment tweeted: “Adam is growing turnips and Peter has turned into one!”

I’m very disappointed in you Pete. Just because you “didn’t do anything” doesn’t mean that you haven’t betrayed Jen. @ITV #SecretsAndLies #ColdFeet pic.twitter.com/vPuVGadqI0

#ColdFeet is brilliant. thank goodness Pete didn’t do anything stupid. couldn’t of coped if he’d of broken Jen’s heart! ❤️ the perfect balance of happy, sad, family, friendship and comedy. 👏🏼

Luckily for their marriage, Pete decided to do the right thing. He left Sandra’s bedroom and returned home, where he told Jen: “I’d rather be with you and not have sex than have sex and not be with you.” Phew!

Viewers across the nation sighed with relief, and some sent messages online that said: “Good decision, Pete” and “If Sandra knew what  Jen had been through she wouldn’t try to [bleep] her husband.” 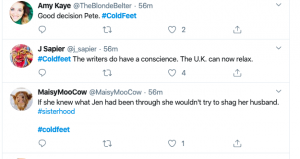 By the end of the episode, marital harmony was restored at the Giffords’. In fact, all the blokes were kissing either their current partners…

…Or, in the case of David (Robert Bathurst), his ex Robyn (Lucy Robinson). Imagine if those two got back together!

The latest series will end next week and there are still plenty of loose ends to be tied up. What will happen with Matt and Liv?

Will Adam and Karen take off in that hippy camper van and travel the world?

Will David finally decide whether he’s growing a proper beard or is he just forgetting to shave?