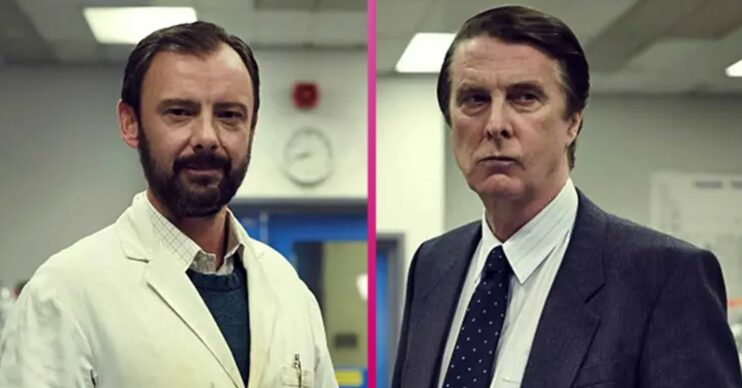 Code of a Killer on ITV1 – is it a repeat and how many episodes is it? Who’s in the cast?

Code of a Killer stars actor John Simm as a brilliant scientist who unlocks the key to DNA fingerprinting and helps catch murderer Colin Pitchfork.

But is the ITV drama a repeat? How many episodes is it and who stars in the cast?

Read more: Colin Pitchfork – portrayed in ITV drama Code of a Killer – is released from prison

Code of a Killer is based on the story of Sir Alec Jeffreys’ discovery of DNA fingerprinting.

The drama follows the brilliant scientist and pioneering detective as they join forces to create the most significant advance in modern criminal investigation.

Meanwhile, a few miles away, DCS David Baker (David Threlfall) led the search for the murderer of two schoolgirls Lynda Mann and Dawn Ashworth in Leicestershire.

Together, the pair pursued the man who raped and murdered the two teenage girls and subsequently caught the killer – Colin Pitchfork.

TV viewers will probably know David best from his role as Frank Gallagher in Shameless, a role he played from 2004 to 2013.

The Manchester-born actor also starred in What Remains, Ripper Street and Troy: Fall of a City.

John, 51, is known for playing Danny Kavanagh in The Lakes, Cal McCaffrey in State of Play, DCI Sam Tyler in Life on Mars, The Master in Doctor Who, and Baxter in Mad Dogs.

He most recently took on the role of  DSI Roy Grace in ITV1’s detective drama Grace.

Read more: John Simm stars as DS Roy Grace in ITV’s Grace: Who is his actress wife? What else has he starred in?

Is Code of a Killer a repeat? When did it first air?

Code of a Killer is indeed a repeat.

Episode one begins in 1983, in a village outside Leicester, when Lynda Mann is found raped and strangled to death.

A year on, after an exhaustive but fruitless search for the killer, DCS David Baker is forced to scale down the investigation.

In episode two, the world is introduced to the idea of forensic DNA…

At the time it was first shown, the Guardian said: “David Threlfall’s detective hunts a serial killer while John Simm’s DNA profiler wrestles with a corny script in this ‘based on real events’ drama.”

The Independent said: “The true story of DNA profiling grips despite a shaky script.”

The Radio Times wrote: “Still, even the clichés can’t completely disguise the incredible story at the heart of Code of a Killer.”

Code of a Killer is two episodes.

The second and last episode airs the week after on Monday October 18 2021 at 9pm on ITV1.

Each instalment is 80 minutes long, including ad breaks.

Code Of A Killer John Simm