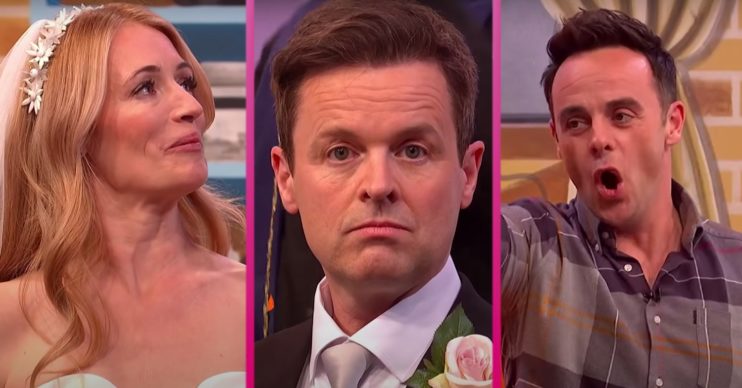 SMTV Live pals were joined by an all-star cast

Saturday Night Takeaway fans were delighted to see Ant and Dec reunite with Cat Deeley for Chums – and are desperate for more instalments.

And, while their sketch went down a storm with SNT viewers, the get-together left them wanting even more.

Who else took part in the Chums reunion with Ant and Dec?

Also appearing in the End of the Show Show special were the likes of Brian McFadden and Emily Atack.

And Sting and Simon Pegg were also part of the cast, entering their performances into the zany production via video.

Read more: Cat Deeley: Does she still live in America? Is she still friends with Ant and Dec?

How fans reacted on social media

Viewers were blown away by seeing the telly faves assemble for the feel-good dose of TV nostalgia and silliness.

One fan begged on social media: “I absolutely loved Cat Deeley on @itvtakeaway with the return of Chums.

“Thank you so much to you Cat and @antanddec for bringing back my childhood for 10 mins. It was a pleasure. Now please make a mini series. We need more!”

Another overjoyed watcher tweeted: “An ‘End of the Show Show’ that took me back 20 years!

A third person claimed: “They said ‘watch this space’ in the extra show about doing more Chums. I’d love to see more, I adore it.”

And someone else asked: “Bring back Chums and more importantly bring back more of Cat Deeley on prime-time TV.”

But did Chums age well?

However, not everyone was convinced the knockabout format had stood the test of time.

“Wow, I must have had a different sense of humour when I was a young teen and found SMTV and in particularly Chums hilarious,” one wrote.

“Tonight’s return was quite frankly hard to watch. SNT still best thing on telly on a Saturday evening tho!”

And many overwhelmed social media users were also incredulous about the passing of time since their childhoods.

One Twitter person sighed: “Genuinely nearly cried when I saw the original #Chums set. It was such a big part of my childhood. Seeing Ant, Dec and Cat together again was magical.

“Can’t believe it’s been 20 years since the wedding episode.”

And yet another person added: “Trying to explain SMTV and Chums to my nearly 18 year old… made me feel really old!”