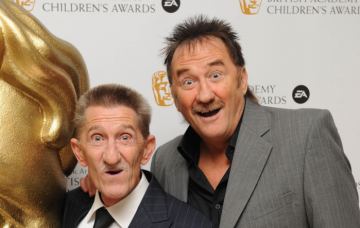 The duo will star on their own Channel 5 series

Saturday night TV viewers will soon be saying “To me, to you…” after it was revealed comedy legends the Chuckle Brothers have landed their own new show.

Paul and Barry Elliott, with a combined age of 143, are following the late Sir Bruce Forsyth in proving age is no barrier to a primetime hit.

Paul and Barry are making 12 hour-long episodes of their new Channel 5 show. The programme will be broadcast at a date to be announced.

Read more: To me, to ewwww! Chuckle Brother hits back over “flirty” message to Caroline Flack

Fans quickly shared their joy on social media, with one tweeting: “Finally, some good news – the Chuckle Brothers are back on TV!”

Another wrote: “It’s the news we all desperately needed to cheer us up.”

While a third added: “The Chuckle Brothers are coming back, this is the best thing to happen in 2018, what icons.”

Finding out ‘ Chuckle Brothers ‘ is getting aired on TV again has just made my day.

Hearing the chuckle brothers are coming back is the best news

@PaulChuckle2 THE CHUCKLE BROTHERS ARE BACK, DREAMS DO COME TRUE

The Channel 5 deal marks a triumphant comeback for the brothers, famous for their catchphrase “To me, to you”, who haven’t had their own show since the BBC axed ChuckleVision in 2009 after 292 episodes spanning 22 years.

But they’ve not been strangers to our screens. The pair guest-starred in an episode of Benidorm last month, playing a magician (Paul) and his glamorous assistant (Barry in drag).

They received a special award at the Children’s Baftas 10 years ago and even recorded a charity single called To Me, To You (Bruv) with Tinchy Stryder in 2014.

The record was in aid of the African-Caribbean Leukaemia Trust.

It has been rumoured that Paul and Barry would be housemates on Celebrity Big Brother, although the siblings suggested they’d heard nothing back from producers because they “weren’t nasty enough”.

On their forthcoming show, A TV source told The Sun: “It’s going to be fun for all the family, a bit like You’ve Been Framed but with more of the brothers’ own input.

“Paul and Barry have spent their lives falling over and making the public laugh. Now they are watching us make fools of ourselves.”

Will you be watching their show? Leave us a comment on our Facebook page @EntertainmentDailyFix and let us know what you think!