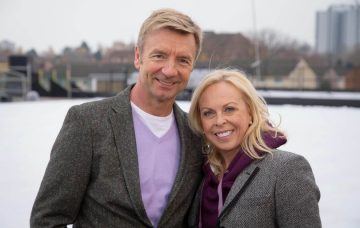 Leaving the skating to the amateurs?

Torvill and Dean fans are set for disappointment as a new season of Dancing On Ice approaches – the iconic pair won’t be taking to the ice on the show.

The ice skating champions are returning and this time will serve as judges on ITV’s figure skating show, but have been told they won’t be permitted to perform themselves.

Show bosses have decided not to take the risk that the Olympic gold medalists might injure themselves, due to an insurance issue.

Speaking to the Daily Star, Christopher Dean expressed his regret at the decision.

“In the past there has been an issue about health and safety that meant we couldn’t go on the ice before a certain time,” he said.

“This series they haven’t insured us to go on the ice. So they won’t let us go on.”

Jayne Torvill was allegedly outraged by the decision, saying: “I was standing there and I was like really?!”

Christopher claimed the threat of injury was not important, as injuries wouldn’t get in the way of the pair serving as judges.

“We aren’t allowed to do any dangerous sports in case we get injured. But I don’t get it,” he said.

“We’re judges, so could still sit there and do that even if we were injured.”

Torvill and Dean made a name for themselves with a string of gold medals in the 80s.

They’ve been stalwarts of Dancing On Ice since its first season in 2006 – also appearing in the Australian spin off of the show.

The new season of Dancing On Ice is set to start on Sunday, January 7.