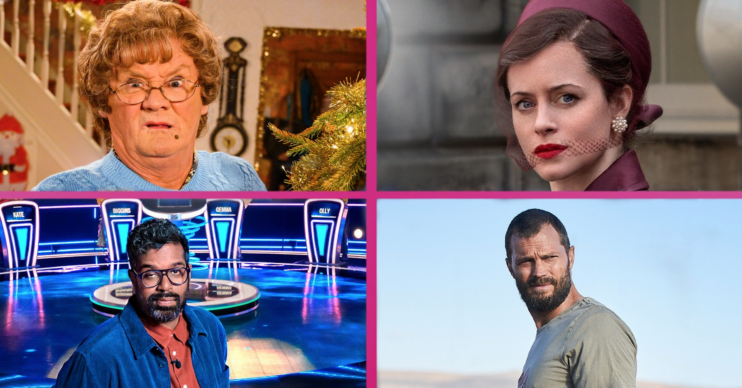 Look at this lovely lot!

This year’s Christmas TV is really coming together, and now the BBC has unveiled its big festive line-up.

Aunty is giving us all your favourites, plus some new crime drama, a returning quiz classic, and lots more besides.

So what’s happening? Read on for the full lowdown.

Christmas TV: Drama on the BBC

We’re getting some big dramas on BBC One for Christmas.

First off is A Very English Scandal, the second series of the, well, scandal-based drama.

Claire Foy from The Crown and Paul Bettany star in the three-part series, which centres around the incredible life of Margaret Campbell, Duchess of Argyll.

She was involved in one of the juiciest legal cases of the 20th century in the 1960s.

And then there’s thriller, The Girl Before, starring Gugu Mbatha-Raw and David Oyelowo.

Another thriller – The Tourist – stars Hollywood hunk Jamie Dornan as a man in Australia trying to find his identity.

Finally, we get something for the family.

David Tennant stars in a new version of Around The World In 80 Days and there’s new Worzil Gummidge guest-starring Bill Bailey. Hurrah!

The first ever Death In Paradise Christmas special

We’re getting the first-ever Death In Paradise festive special this year.

Ralf Little is back as Neville Parker on Saint Marie, and there’s the return of a fan favourite.

Danny John-Jules is back as Dwayne in an all-new Christmas mystery.

Christmas TV: The return of The Weakest Link

For the first time in four years, quizzing classic The Weakest Link returns to the BBC line-up.

However, this new version features a new host – Romesh Ranganathan – who welcomes in eight celebs to win money for charity.

Elsewhere, Bradley Walsh is back with Blankety Blank, and Michael McIntyre hosts a festive special of The Wheel.

Finally, we’re getting some BBC faves on during the Yuletide season when it comes to comedy.

We’re getting two visits to Mrs Brown’s Boys – one at Christmas and one at New Year – and a festive spesh of Not Going Out, with Jason Donovan as a guest.

Add in some Strictly, some Top Gear, some Aardman and Julia Donaldson animation and some David Attenborough and there’s really no real reason for you to leave your sofa.