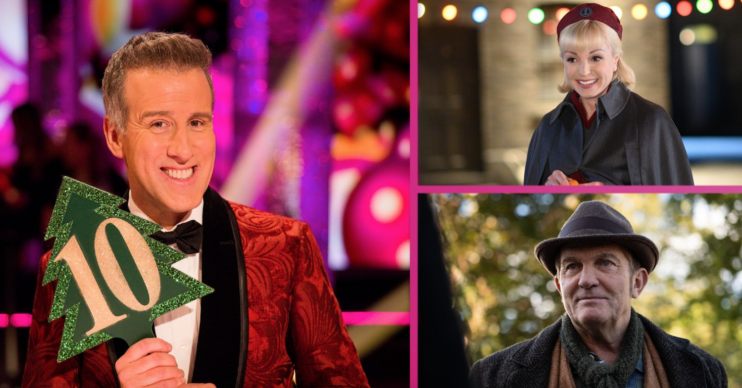 We've got you covered for the big day

It’s traditionally the biggest day for settling down in front of the box – but what were the Christmas Day TV ratings winners?

Well, it should come as no surprise that the Queen’s Speech took top spot, with 7.4million viewers.

Elsewhere in the Top 10, eight of the programmes were from the BBC, with the remaining two ITV offerings.

Next came the Strictly Come Dancing special, with 5.8 million – a slot normally taken by Call the Midwife.

Mary Poppins Returns got 3.7million, while Superworm had 3.34million viewers.

Then came the soaps… Coronation Street on ITV was watched by 3.25million while channel mate Emmerdale, ITV, had 3million viewers.

Finally EastEnders had 2.9million pairs of eyes on it.

ITV’s primetime The Larkins Christmas special didn’t make the Top 10… however lots of viewers will be catching up on TV over the coming days so this could change.

Christmas TV – what was on Christmas Day?

This Morning
ITV, 10am

It’s not often that Phil and Holly are on a Saturday, but this (very) festive episode of This Morning got the big day off to a fab start.

Joel Dommett and Leona Lewis were guests, and there were tears, too, as the duo exchange Christmas presents.

Eamonn Holmes and Danny Jones were guests, while James cooked up a festive feast.

It might have only been gone for a week, but Strictly was back for its annual festive spesh.

In a special Christmas episode of the hit guessing game (the new series starts next week), some favourite characters returned.

Call The Midwife
BBC One, 8pm

It was 1966 in Poplar, and Lucille and Cyril were preparing for their winter wedding.

However, Nonnatus House was overrun with expectant mums to be, and Sister Mildred (Miriam Margolyes) returned to action.

Paul and Prue were back with a special, It’s A Sin-themed episode.

Bradley Walsh returned as Pop and the whole village was preparing for the big festive panto.

However, they were also on edge because there’d been a spate of burglaries. Elsewhere, Charley’s folks visited the farm…  to meet the Larkin family for the first time.

Read more: When will the Mrs Brown’s Boys Christmas 2021 special be on TV?

The Siddiquis, Giles and Mary, Jenny and Lee, Ellie and Izzi, Marcus and Mica, and Amira and Iqra all went through their best and worst TV of 2021.

However, Father McBride issued some strict instructions to keep her in check.