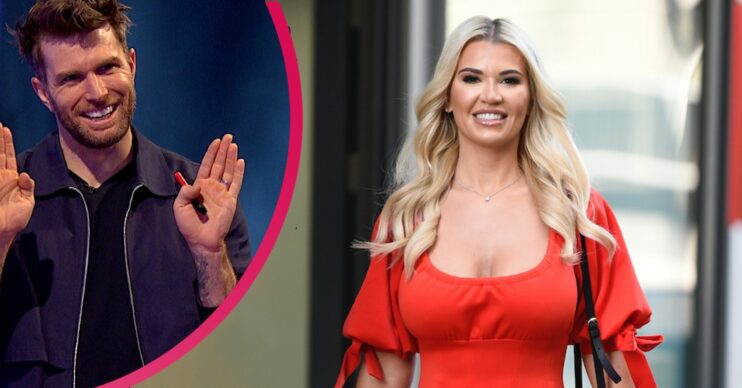 It allegedly happened on the set of a Joel Dommett show

Christine McGuinness has claimed an appearance on Joel Dommett‘s TV show left her feeling “mortified” in her new book.

The model, who is married to TV funnyman Paddy McGuinness, speaks about the incident in her autobiography, Christine McGuinness: A Beautiful Nightmare.

She claimed she was bullied on the show and alleged that Joel’s female co-star overstepped the line.

The unnamed woman allegedly told her: “I’ve got no [bleep]ing idea who you are.

Christine chose not to name the show or the woman responsible for reducing her to tears.

Christine added: “One of the directors came to check on me afterwards. I guess, as much as I tried to hide my devastation, I was mortified.”

She goes on to say that she called Paddy as soon as she left the studio in floods of tears.

The Real Housewives of Cheshire star also claimed that the unnamed woman tried to make amends later, claiming she hadn’t meant the cruel words and that it was just “banter”.

ED! has contacted Joel’s representative for comment. There is no suggestion that Joel is in any way involved in the alleged incident.

What else does Christine McGuinness say in her book?

Christine’s book has come with a host of revelations, including the heartbreaking story of how she was raped at 13 and went on to blame herself for the attack.

Mum-of-three Christine recalls how she was just a teenager and lost her virginity when a boy from school raped her.

She subsequently felt she was to blame as she was under the influence.

Christine also explains how she remembers being so drunk she was unable to move her attacker off her.

She writes in her book, published by the Mirror: “I took myself upstairs in a drunken stupor and got into bed. Not long after climbing under the covers while intoxicated, a boy from school came in and had sex with me, against my will.”

Read more: Christine McGuinness breaks silence of photos of Paddy with another woman

Christine explained: “I remember saying ‘no’ and I tried to push him off, but I was so drunk I couldn’t physically move him.”

Mum-of-three Christine now realises she was not at fault. But as a child, she blamed herself “massively”.

She reflected: “It’s why I’m really protective of my children, the girls especially. I try to take strength out of any kind of trauma. But there was no denying it was awful.”