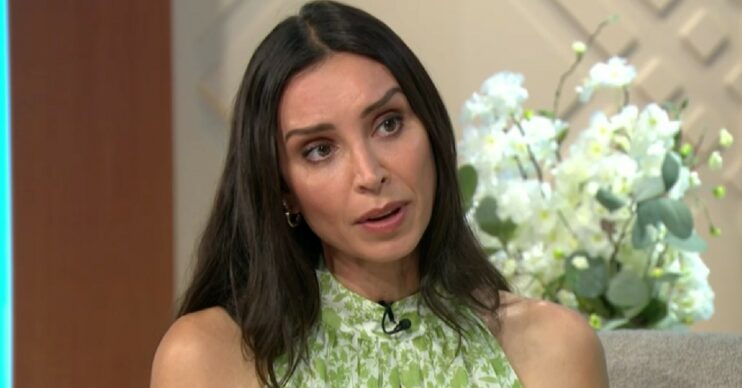 She urged viewers to check their post-baby bodies

Christine Lampard has revealed she was diagnosed with a hernia six weeks after giving birth.

The popular host, who shares two children with husband Frank Lampard, opened up on her post-baby health on Lorraine today (August 17).

During the show, Christine sat down with Maria Elliott to discuss the stigma surrounding post-baby bodies.

The two went on to talk about the health concerns women may face after welcoming a baby.

Sharing her own experience, Christine said: “Generally people have a six-week check with a GP after having a baby.

“It was actually at my six-week check up that I discovered I had a hernia. I didn’t even know that was the case.”

I don’t think my hernia would ever have been diagnosed

The presenter continued: “If you don’t do these follow up things, you can go about your life as normal and be doing an awful lot of damage.”

Maria went on to urge viewers to check themselves regularly, particularly their pelvic floor.

Christine later added: “If I hadn’t physically seen a doctor at six weeks, I don’t think my hernia would ever have been diagnosed.”

Christine takes over on Lorraine

Meanwhile, Christine is currently filling in for Lorraine Kelly on the ITV show.

The host is taking over for four weeks this summer, after welcoming her baby son Freddie in March.

But it appears some viewers prefer Christine to regular host Lorraine.

On a recent upload, one fan commented: “You are such a joy to watch. The only time I ever tune into Lorraine is when you are presenting it.”

Another shared: “You should have the full-time job. Such a breath of fresh air.”

In addition, a third praised: “Wish you could replace Lorraine, she’s so boring. You know exactly what she’ll say about all the fashion, usually ‘I love this one’.”

Ahead of the summer stint, Christine appeared on the show to discuss her new addition with husband Frank.

She said: “He’s been a great little baby, slipped into the family just seamlessly. He’s been a gorgeous little addition.”

Christine and Frank are already parents to daughter Patricia, two.