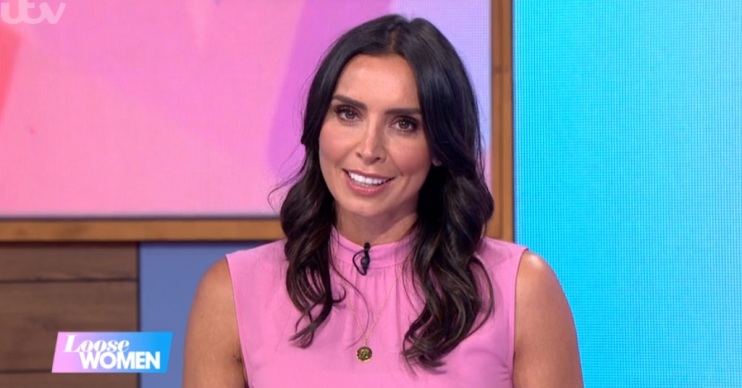 She welcomed her daughter last September

Christine Lampard has revealed she was mum-shamed by a stranger while out with her daughter Patricia.

The presenter, who became a mum for the first time in September last year, opened up about the shocking incident on Thursday’s Loose Women.

Christine, 40, said she was at a café with Patricia when a man decided to make a comment about her parenting.

She explained: “Before I was leaving, he said, ‘I just want to let you know, I think you should burp her a bit more.’

“I wouldn’t mind if she had been screaming the place down, and I had maybe genuinely done something wrong – I get that – but I didn’t think I had, and she was sleeping!

“I thought, I don’t know you! The things that ran through my head that I didn’t say. I just left it.”

Last month, the couple enjoyed their first holiday with their baby girl.

Doting mum Christine shared a sweet picture of herself and Patricia looking out to the mountains next to a pool.

Earlier in the month, the star admitted she was suffering from “baby brain” as she said her head is “all over the place” looking after her young daughter.

Speaking on Loose Women at the time, Christine said: “I feel alright, I think! My head is just all over the place, my little one is nine months now and I don’t know whether I’m coming or going.

Read more: Christine Lampard confesses she’s “all over the place” looking after daughter

She added: “I just can’t seem to get myself out of the house in the time that I need to.

Have you ever been parent-shamed? Leave us a comment on our Facebook page @EntertainmentDailyFix and let us know.