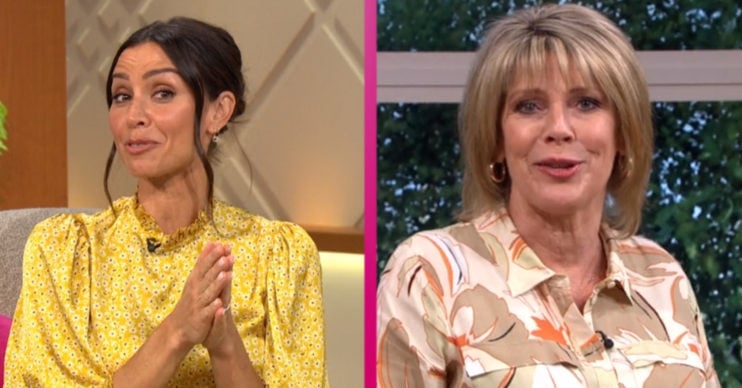 Ruth got mixed up with a guest appearing on This Morning

Christine Lampard laughed as Ruth Langsford called her by the wrong name today.

At the end of Wednesday’s Lorraine, Christine crossed over to Ruth and Eamonn Holmes to find out what was coming up on This Morning.

But Ruth suffered a slip-up as she called the presenter “Caroline”.

What happened between Christine Lampard and Ruth Langsford?

Christine, who is filling in for Lorraine Kelly, said: “Now Eamonn and Ruth are coming up, good morning!”

“We’ve got Caroline Hirons, the beauty expert, with lots of products that she says are really good and worth spending your money on.”

Meanwhile, on This Morning earlier this week, Ruth was speechless by Eamonn’s cheeky quip.

The pair were discussing posture when Ruth told her husband: “Sit up straight.”

However, Eamonn replied: “I’m fully erect, what are you talking about?”

Meanwhile, Ruth and Eamonn will finish their summer hosting duties next week.

Holly Willoughby and Phillip Schofield will return on Tuesday, September 1.

The pair will be joined by a string of guests including actor Nigel Havers, who will present a four-part ‘Best of British’ segment.

In the segment, he will travel by air, sea and land from Dorset along the great Jurassic Coast.

Lorraine will also return to her show next week.