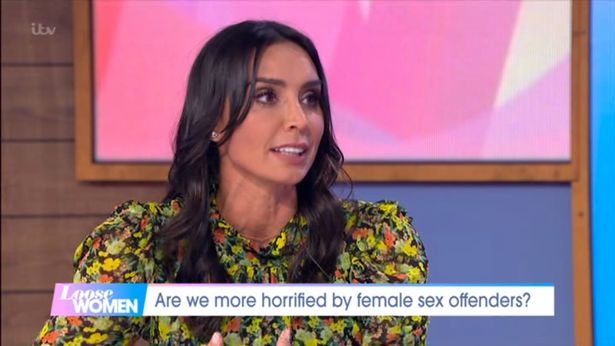 Child abuser is set to be released this year

Christine Lampard looked visibly moved as she discussed the release from prison of a convicted paedophile on today’s Loose Women.

Vanessa George from Plymouth was jailed in 2009 after taking 64 photos of herself abusing children at the nursery in which she worked, but is set to be freed later this year.

And as the Loose Women panel discussed the story on this afternoon’s programme, it all seemed to get too much for mum-of-one Christine.

George, a married mum, was sentenced to seven years in prison for abusing children at the Little Teds nursery.

The children she’s believed to have abused were aged between two and five years old.

However, a parole board has decided that the 48-year-old is no longer a risk to the public, and have recommended her for release.

That prompted the Loose Women to discuss the topic of female sex offenders, with Kaye Adams admitting that they somehow seem different to their male counterparts.

Read more: Christine Lampard recalls shocking moment she was mum-shamed while out with daughter

She told the panel: “It’s just seeing a female face looking out at you – it evokes a different feeling in you.

“They said seven years would be the minimum she would serve. I just cannot conceive how a woman can do that. I know it’s so naive.”

Nadia Sawalha queried: “Is it because we want to feel there’s some safety? We don’t really want to absorb that it’s women as well, because then how do we ever feel safe? How do we ever choose who to look after our children?”

At that point, Christine – who gave birth to a daughter with former footballer Frank Lampard in September 2018 – said: “As a woman who’s had her own children, there’s different levels to this for me. I just can’t get my head around it.

“Just being a new first-time mum and reading those headlines today about her being released, I instantly just thought about the parents of those infants.

“I have to say, I don’t think I could let it go if I were one of them, the anger I would feel over it is just – it’s almost debilitating.

“It almost makes me emotional because how do you deal with that? You trust these people.”

Loose Women returns on Monday at 12.30pm on ITV.