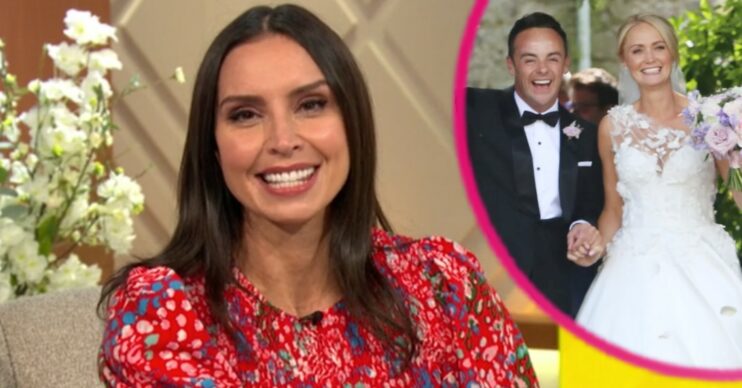 Christine was joined by husband Frank on the day

Christine Lampard has revealed she nearly lost her voice whilst ‘screaming’ at Ant McPartlin and Anne-Marie Corbett’s wedding reception.

The presenter attended the star-studded ceremony on Saturday, alongside her husband Frank Lampard.

During Monday’s edition of the ITV show, the presenter sat down with TV medic Dr Amir Kahn.

“Have you been burning the candle at both ends?”

Christine, 42, responded: “I have been, I was at a wedding at the weekend, I’m sure you’ve maybe spotted that it was in the paper of course, Ant and Anne-Marie they tied the knot on Saturday.

“Beautiful ceremony, beautiful wedding and clearly an even better night time party because not only was I screaming over the music to speak to people, but I was obviously singing as well.

“And the voice went yesterday Amir I’ve got to say.”

Christine, who is standing in for Lorraine Kelly, added: “It’s slowly coming back today, but if I lose it completely that’s why.”

The TV star was one of the many famous faces at the ceremony in Hampshire over the weekend.

The famous duo turned up the church together, ahead of Anne-Marie’s big entrance.

What else has Christine been up to?

Meanwhile, Christine is presenting Lorraine for four weeks this summer.

She returned to the ITV programme last week, much to the delight of viewers at home.

Marking her return on social media, Christine penned: “Loved my first week back on @lorraine thanks for all your lovely messages!!”

But it appears some even prefer Christine to regular host Lorraine.

In the comments, one wrote: “You should have the full-time job. Such a breath of fresh air.”

Another demanded: “You need to get the job full-time, well done.”