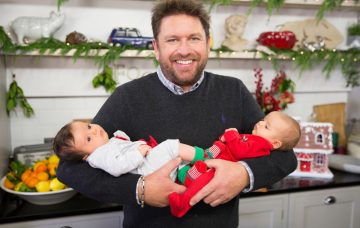 James Martin had a little cuddle with the tots

Chris Evans has proudly showed off his gorgeous newborn twins to the world three months after his wife Natasha Shishmanian gave birth.

The doting dad, 52, will appear on this weekend’s James Martin’s Saturday Morning and his baby son Walt and daughter Boo will join him.

Radio 2 host Chris introduces his little ones ahead of his cooking stint and host James even had a little cuddle with the tots.

Walt and Boo looked super cute in festive Christmas babygros as James held them while posing for the camera.

In September, Chris confirmed the twins’ arrival on the Radio 2 Breakfast show.

The statement, read out on air, said: “Ping and Pong arrived safe and well last night.

A day later, the couple revealed their babies’ names.

Meanwhile, during James’ show, Chris opens up about leaving his Radio 2 Breakfast show after bagging a role at Virgin Radio, which will launch in January 2019.

Chris tells James: “The BBC is a marvellous and wonderful place and I thank them for everything.

“I have no complaints whatsoever. I had an amazing time there – to take over Terry’s [Wogan] show was such an honour and such a treat.

“I survived it and lived to tell the tale. I can see bright, bright sunshine, I can see blue, blue skies and I can’t wait to get to Virgin Radio.”

Earlier this week, Chris revealed he said “yes” to appearing on Strictly Come Dancing next year.

During an appearance on The One Show on Wednesday, host Alex Jones said: “If rumours are to be believed, Chris Evans, you probably won’t have time to do panto next year.

Chris, who will host his final show for Radio 2 on December 24, said he met the commissioning editor of Strictly for a cup of tea and was warned, “it’s not as easy as maybe you imagine it will be”.

He added: “I think what’s funny about it, everyone puts it off and tries and keep it a secret. No, announce now, we’re doing it now.”

Would you like to see Chris on Strictly next year? Leave us a comment on our Facebook page @EntertainmentDailyFix and let us know what you think!