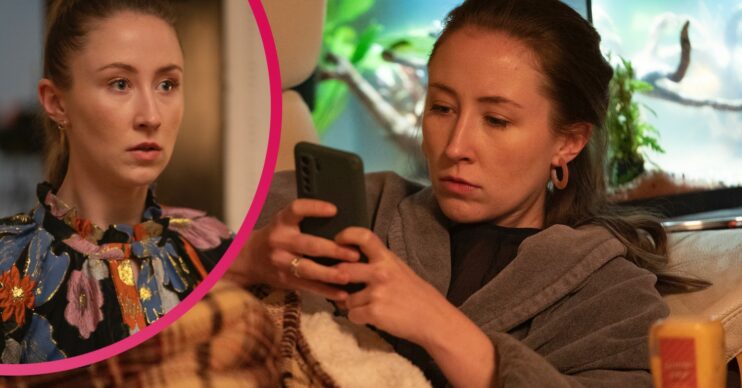 Chloe on BBC One: Five burning questions we have after episode two

Is Becky a heroine or not to be trusted?

Chloe episode two on BBC One and Becky Green’s (Erin Doherty) mission to find out what happened to her former childhood friend, Chloe Fairbourne, took some new twists.

Episode one saw Becky lie her way into the life of Chloe’s former best friend, Livia, under the guise of alter-ego, Sasha. Becky was stunned to discover she’d been the last person Chloe called before her death and she wants to know why.

Her mission stepped up a gear in the second ep as Becky fibbed her way into Chloe’s home, and bed. With Chloe’s husband, Elliot.

It’s all beginning to get very complicated.

Here’s what we need to know after episode two.

Becky’s mum, Pam, became very distressed when she heard the neighbour’s baby crying. She started frantically asking Becky where her ‘sister’ was and called the missing baby ‘Sasha’. Becky tried to explain that the crying wasn’t coming from their home though.

Pam’s distress turned into confusion and she became almost aggressive when Becky tried to comfort her. Is Sasha behind Pam’s condition? And did something terrible happen to her?

2. Does Becky believe Chloe really took her own life?

All of Chloe’s friends seem to think she was depressed, but is this true and does Becky believe this? She found medication stashed in Chloe’s house, suggesting she hadn’t been taking it.

But was Chloe not taking her meds, and this made her depression return? Or was she stashing the pills because she felt she didn’t need them?

Elliot’s recollection of Chloe’s suicide sounds convincing, but he seems to have moved on extremely quickly. Hmmm…

3. What is Josh’s game in episode two of Chloe?

Josh has enjoyed teasing Becky, knowing that he can drop her in it with her new ‘friends’ easily. The scene where he grilled her about where she worked in Tokyo was so tense.

It also added some much-needed light relief when Becky played back and asked him to tell the group about being in a musical at school. Josh didn’t look very happy at all.

But then he stepped in and rescued her as she floundered while lying to Liv about her friendship with art collector, Georgia.

Is he enjoying playing with her and flirting? Or is there more to Josh than meets the eye?

4. Is Becky enjoying her new life too much?

Becky is obviously playing detective to find out why Chloe called her, but she also seems to be enjoying her new lifestyle.

Clearly taking care of her mother and working as a temp has left Becky isolated and unhappy in her own life. Now she’s getting to go to glam parties, wear gorgeous clothes and have sex with hot men.

Read more: What else has Chloe star Erin Doherty been in and who is her famous girlfriend?

Liv even offered her a job working in events with her.

Is Becky getting a bit too cosy in her role as Sasha? Will her alter-ego lead to her forgetting who she really is?

5. Why was Chloe getting contraceptive injections if she was trying for a baby?

Elliot and Livia both seem convinced that Chloe wanted to be a mum.

Elliot even told Becky that they’d been trying for years and were about to start IVF.

But Becky – posing as Chloe – discovered she was regularly getting the contraception injection.

What was going on?

Chloe continues Sunday, February 13 at 9pm on BBC One. All episodes are available on BBC iPlayer.

What is your review of Chloe on BBC One? Leave us your thoughts on our Facebook page @EntertainmentDailyFix.