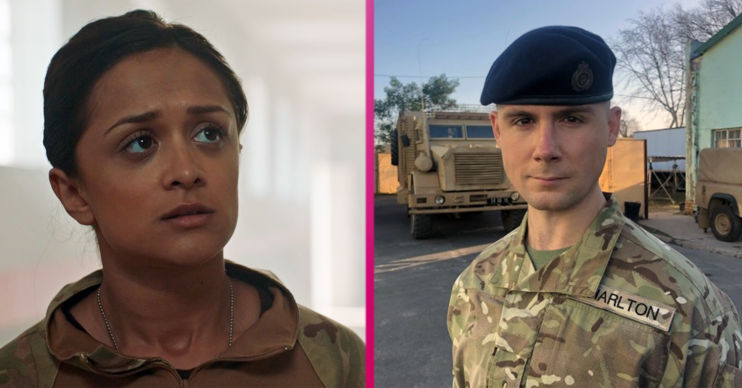 Who is Cheese in Our Girl and how does he know Mimi? Their secret connection explained

Cheese will make his Our Girl debut tonight (April 14).

Former EastEnders star Danny Hatchard revealed that he was joining the BBC drama alongside Michelle Keegan some months back.

Now, the wait is finally over – 2-Section are about to welcome a new face in town.

But Cheese isn’t a complete stranger to everyone…

Who is Cheese in Our Girl?

We’re not sure how he got the nickname Cheese but pretty much all the soldiers in 2-Section have one and he’s no different.

He arrives in Afghanistan to join the squad and will be accompanying them on all future missions.

READ MORE: Who is Our Girl star Danny Hatchard and why did he leave EastEnders?

Producers have teased what fans can expect from the new arrival: “”Cheese is not short of swagger and always has a practical joke up his sleeve.

“He’s prone to pushing jokes too far, which will have dangerous consequences across the series.

How does Cheese know Mimi?

When Cheese arrives in the barracks and is introduced to 2-Section, it’s immediately clear that he already knows Mimi (played by Amy-Leigh Hickman).

Although we’re not told how the pair know each other, it’s obvious they’re not pleased to see each other.

Fans will be well aware that Mimi has been hiding something.

READ MORE: Where is Captain James in Our Girl?

She has lied repeatedly about what her parents do for a living – and this has been picked up on by Prof (Nico Mirallegro).

Mimi also bizarrely pretended to call her parents when Georgie said she should speak to them.

What is she trying to cover up and is Cheese about to let the cat out of the bag?

For now, all we do know is that the new recruit is going to bring about dangerous consequences in the Our Girl series finale.

But will Mimi be at risk? Tune in to find out.

BBC BBC One Our Girl