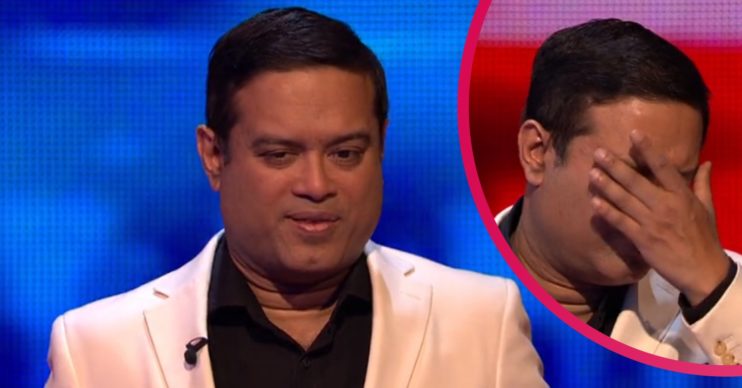 The Sinnerman lost to a team of two

Chaser Paul Sinha has spoken to fans after an “awful” performance on the ITV quiz show.

The Sinnerman, 50, was on The Chase last night (Friday, December 11) with host Bradley Walsh and four new contestants.

Unfortunately for the British Quiz Champ, he failed to catch a two-strong team during the final chase and they escaped with £12,000.

What happened to Chaser Paul Sinha?

During one particularly excruciating moment in the final round, Bradders asked Paul how many Queens the United Kingdom had during the 20th Century.

Paul, taking a second to think of an answer, suggested: “One?”

However, Bradley revealed that was incorrect and turned to the team, who answered right with ‘two’.

Afterwards on Twitter, Paul took the opportunity to reassure fans that his Parkinson’s had nothing to do with the dodgy performance.

Just awful. Absolutely no illness-related excuses. Just one of those days.

In a later tweet, he clarified that it was “absolutely nothing” to do with the neurological disease, and that “sometimes you have an off day”.

This tweet seems harsh. It's just my way of explaining that sometimes you have an off day, and it's absolutely nothing to do with Parkinson's you just got played off the park.

He said: “This tweet seems harsh. It’s just my way of explaining that sometimes you have an off day, and it’s absolutely nothing to do with Parkinson’s. You just got played off the park.”

Chaser Paul doesn’t shy away from speaking openly about his experiences with Parkinson’s.

In September, the funnyman had fans in stitches as he joked that the disease was getting in the way of him enjoying sex.

The gay comedian mocked his condition on social media as he compared it to ‘living in the United Arab Emirates’.

He tweeted: “Having Parkinson’s is like living in the UAE. The sheikhs control your life, gay sex is out of the question, and there are a hell of a lot of parking spots.”