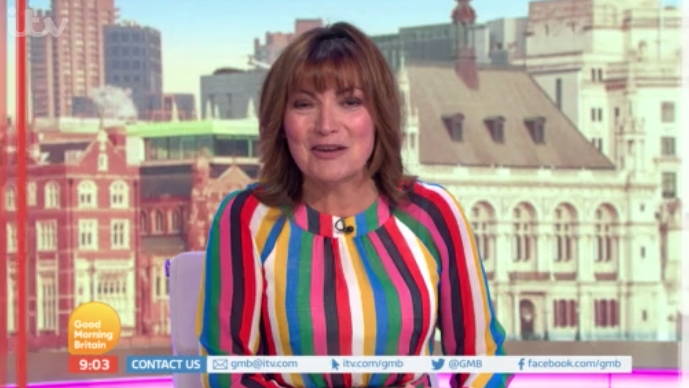 The TV presenter, 45, took to Twitter to expose Lorraine as she shared a snap of her co-star in a pair of UGG boots on the set of the ITV show today (June 19).

The photo shows Lorraine, 60, giggling to herself while wearing a glamorous striped dress and boots.

If you ever wondered what footwear @reallorraine teams with her gorgeous dresses while broadcasting, I can reveal all… rocking this look this morning! 🙌 @lorraine pic.twitter.com/GLE47TeZMl

Charlotte wrote: “If you ever wondered what footwear @reallorraine teams with her gorgeous dresses while broadcasting, I can reveal all… rocking this look this morning! @lorraine.”

Fans were quick to comment on Lorraine’s footwear choice.

One wrote: “Love @reallorraine and how she is so normal.”

Another said: “Comfort is what it’s all about.”

A third asked: “Is it that cold in your studio??”

It certainly isn’t the first time Lorraine’s on-screen ensemble has been questioned in recent days.

Earlier this week, the lovable host was forced to respond to a fan after they spotted her without her wedding ring on the popular morning show.

Lorraine later replied to the comment, saying: “Washing my hands so much I had to take rings off!”

And it appears many of her followers agreed with her decision.

One commented: “You are right as it’s impossible to get hands really hygienic with rings on!”

A second agreed: “Haven’t worn jewellery since lockdown – gathers germs and gets ruined with hand washing. I thought everyone was doing that.”

The ITV favourite has been happily married to her husband Steve since 1992.

The couple share daughter Rosie, who recently returned back to the UK after working in Singapore for the last four years.

Upon her return, the 25-year-old said she went into self-isolation for two weeks before reuniting with her parents.