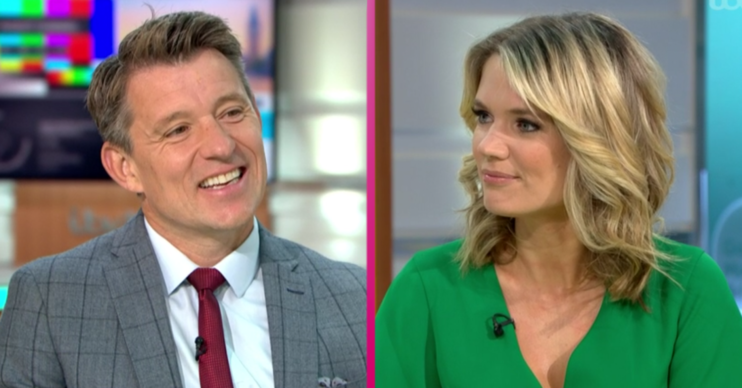 In today’s issue of the Mirror (June 19), a stunning picture of the GMB presenter graces its third page.

While reporting on the Ascot yesterday (June 18), she dressed up to the nines in a gorgeous gown and fascinator to get into the spirit of the races.

And the stunning pictures made this morning’s papers.

Teasing  his co-host about appearing on. page 3, Ben said: “Well we had Sam Fox on yesterday to talk bout the history of Page 3 and I was thrilled to turn to page three today and see that [Charlotte] were starring.”

Opening up a copy of the paper, he quipped: “There yo go, this is Charlotte!

“She’s been doing all the ITV sport racing coverage from Ascot.

“Not there because of social distancing but she’s still living the life.”

Charlotte laughed  as she insisted to viewers that she doesn’t usually dress up like this to work from home.

“I actually had a delivery yesterday and when I opened the door dressed up like that it did take the deliveryman by surprise,” she said.

“Usually it’s the tracksuit bottoms so he did wonder what was going on.

“But it’s nice to get dressed up and join in the spirit of things.”

Sam posed for The Sun for the first time when she was just 16, making her the youngest Page 3 model ever.

Opening up about her debut in the paper, she said: “Part of me was feeling euphoria and wow my God, I’m on the front page of this huge newspaper.

“The part of me was thinking about going to school tomorrow and walking through those gates.”

She added: “It was a bit difficult going back to school. It was a shock that I was on the front page topless. But it did change my life…and I was very well looked after.”