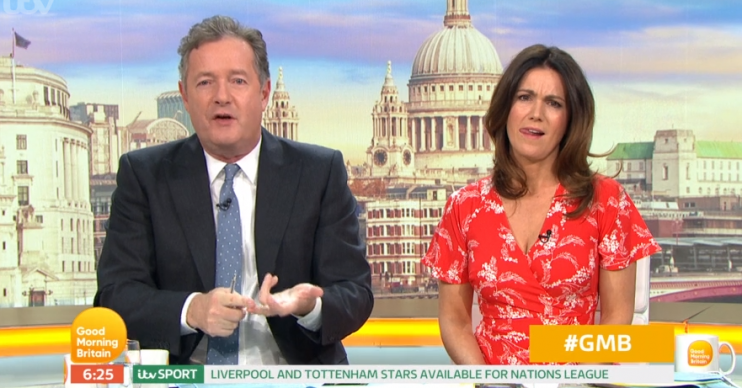 Susanna has lost over a stone-and-a-half

Piers Morgan has admitted he liked Susanna Reid when she was “chunked up” as he discussed her weight loss.

On today’s Good Morning Britain, Susanna opened up about losing a stone and a half for health reasons by giving up alcohol and cutting out snacking.

During a discussion about plus-size model Tess Holliday’s body positive Cosmopolitan cover, Piers said: “Literally you went to see a doctor last summer who said you need to lose a bit of weight for health reasons, so you lost a stone and a half in six, seven weeks.

“You dropped food, drink, enjoying yourself, partying… You dropped every single thing in your life because it was unhealthy.

“And now you’re saying we should embrace all bodies. You didn’t embrace your own, did you? You did something about it.”

Piers continued: “Denial about what?” to which Susanna replied: “Food. I had to cut down a bit of food.”

Piers said: “You did it for health reasons. You’ve talked about this, I’m not breaching any trade secret. I sent you there.”

Susanna cut in: “You told me I was too fat, go and see the doctor, lose a stone and a half and you’ll look better.”

Piers admitted: “I actually liked you chunked up…” as co-star Charlotte Hawkins and the studio gasped.

Susanna laughed off his comment and quipped: “Because you like a bit of meat on the bone! I did look a bit chunky, to be fair.”

Piers added: “I did. I like a bit of meat on the bone,” to which Susanna insisted: “I didn’t do it for Piers Morgan, I would just like to point out.”

Piers said: “Now everyone’s horrified. She’s used that phrase about herself. If I say it, there’s outrage. But if she says it, it’s fine.”

Susanna decided to lose weight after her doctor told her she was at the top end of her BMI.

During an appearance on Lorraine in March, the star said: “I went to a doctor because I just wanted to ask him about skin problems and he said I recommend two things.

“One is you stop drinking or cut down on drinking and one is you lose some weight because you are at the top end of your BMI.

“It can creep up without noticing, I cut out snacking, I found waking up so early in the morning and you’re in energy deficit and all your body can think is, ‘have toast, have biscuits’ and you can pile it on really.”

At the end of last year, Susanna admitted she felt “clearer, sharper and more energetic than ever” after giving up alcohol.