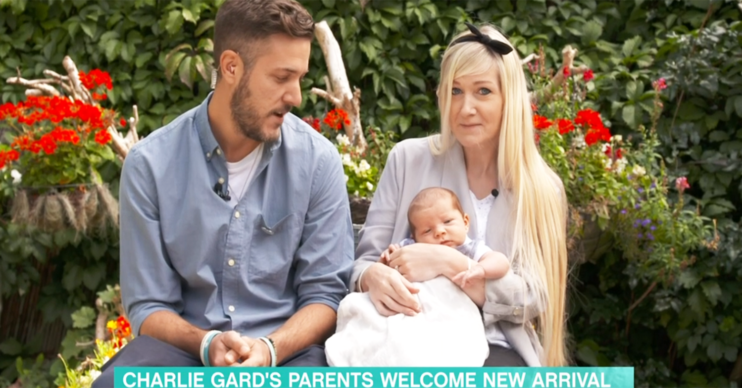 Charlie Gard’s parents introduced their new baby son on This Morning and viewers were emotional.

On Wednesday’s show, the couple showed off baby Ollie and expressed their delight over becoming parents again.

Ollie was born one day after his brother Charlie would have turned four.

What did Charlie Gard’s parents say on This Morning?

Chris said: “I spoke to you Phil last time about that I worried after Charlie that I couldn’t imagine myself loving a baby like him.

He added: “You were bang on the money, mate, because the moment I saw him again, watching a child being born is so beautiful.

“He has lit up our lives like you wouldn’t believe, he’s absolutely gorgeous.”

When asked if they feared their new baby could have had the same condition that Charlie had, Connie said: “We were really worried at first.

What did Connie say?

“But we were lucky that we found out at 11 weeks that he was healthy.”

Connie went on to say she went into labour on Charlie’s birthday.

She said: “I wasn’t due until the 18th of August, but I went into labour on the 4th which is Charlie’s birthday.

“It’s nice they have their own separate birthdays, just one day apart.”

Connie also said it’s “important” to them that “Ollie knows he’s his own person, that he’s not a replacement for Charlie”.

Meanwhile, Chris said they’ve had to “cancel a lot of fundraising events” for their Charlie Gard Foundation because of the pandemic.

He has lit up our lives like you wouldn’t believe, he’s absolutely gorgeous.

He added: “It’s been tough but we’ll crack on. Because we now have a healthy child, it doesn’t mean that our raising funds and awareness of the disease stops.”

Viewers were emotional watching Connie and Chris on the show.

One person said on Twitter: “Congratulations to Charlie’s guards parents on the birth of baby Ollie.”

Another wrote: “I’m not gonna cry.”

A third added: “Congratulations to Charlie’s parents on the birth of their gorgeous baby son.”

Congratulations to Charlie's guards parents on the birth of baby Ollie ❤️❤️ What lovely news during a global pandemic . Some lovely news for you at last #ThisMorning

Congratulations to Charlie’s parents on the birth of their gorgeous baby son 💙💙. #ThisMorning

Meanwhile, last month, Connie, 34, told Mail Online: “He looks so similar to Charlie at the same age – it’s quite uncanny.

“It’s scary looking back at photos of Charlie and looking at our new baby… spitting image.”

Chris added: “We are extremely tired but do not want to sleep as we just want to look at him the whole time.”

Charlie was born healthy in August 2016. However, two months later, he was diagnosed with mitochondrial DNA depletion syndrome.

He and his parents gained international headlines when they fought with NHS doctors in attempt to fly him out of the country to receive additional medical treatment.

However, after they lost their battle in court, Charlie’s health had deteriorated to the extent that he was placed in a hospice and later taken off life support.

Chris and Connie have since been doing fundraisers to help other families in similar situations.