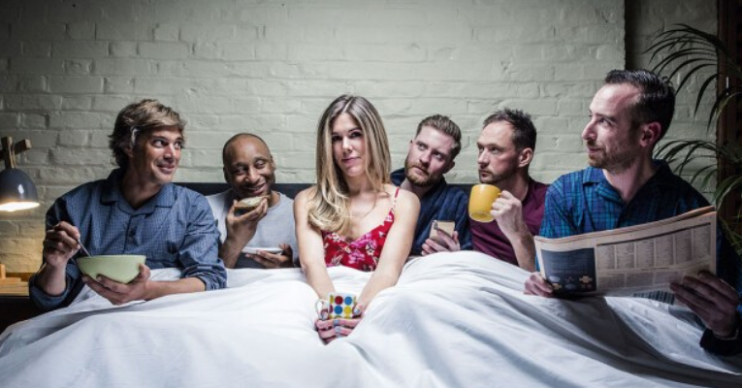 It's awkward and embarrassing - so obviously, great TV!

If you thought you’d seen the weirdest dating show ever with Netflix’s Love is Blind, you were so badly mistaken – Five Guys A Week has well and truly taken over.

Five Guys A Week is so cringe and awkward, but such a good watch at the same time.

The first episode of the show aired on Channel 4 last night and by GOD was it awkward at times – so of course, we loved it.

The whole idea of show revolves around a single lady who invites five men to stay in her house, eliminating one of them at a time to find the one for her.

But – of course – it was never going to be smooth sailing, as the fellas on the opening show all stayed in the family home that ordinarily 34-year-old divorcee Amy shares with her kids.

The elimination process involved Amy brutally dumping one of them after they had made her breakfast each day.

One of the men actually beat her to it, though, opting out after deciding the whole thing wasn’t for him.

As three remained, they had to go round to Amy’s mum’s for Sunday dinner and – CRINGE – her mother started grilling them about their experiences with sex.

Of course, viewers couldn’t help but love the pure awkwardness of the whole thing, taking to Twitter to voice their opinions.

Five guys a week is so cringe and awkward, but such a good watch at the same time. #fiveguysaweek

I knew I shouldn’t have started this, but now I am going to have to watch five guys a week every week. It’s terrible and awkward and wrong.

Some how watching five guys a week 🙈 I just can’t. Its so awkward. 😩😬 pic.twitter.com/JbMrJsJG8k

So theres me thinking #fiveguysaweek was a show about eating a five guys burger! After the initial disappointment I’m now completely and utterly hooked on what is possibly the cringiest bit of television I’ve ever seen.

five guys a week has me sat here watching with one eye open and one eye closed, sooooo cringe but sooooo obsessed

We soon started to see the mens’ insecurities showing through, with some of them doubting their own careers when pitted against the others – leading to a few testosterone-fuelled tiffs between them.

Singer-songwriter Scott admitted that he was finding the whole thing a bit hard to deal with – but then proceeded to get his guitar out and sing a song.

The final meal saw both insecure Glenn and city banker Christian cook Amy a meal, as they both attempted to woo her. In the end Alpha Christian won…

Bring on the next episode!

Five Guys A Week returns next week on 9.15pm where five more guys try to win the heart of one lucky (or unlucky) lady.

Did Five Guys A Week make you cringe? Leave us a comment on our Facebook page @EntertainmentDailyFix and let us know what you think of this story.