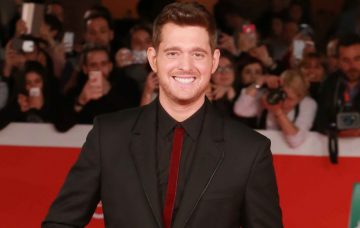 The since-deleted post was sent out from the network’s official account during the singer’s special appearance on Carpool Karaoke with TV presenter James Corden.

During the Stand Up to Cancer telethon, they tweeted: “Watching Michael Bublé talking about the death of his son from Cancer is one of the most heartbreaking things we’ve ever watched.

“Sending him and his family so much love for telling their story!”

Michael’s son Noah, 5, was diagnosed with liver cancer in 2016, but is now in remission.

In April 2017, Michael confirmed: “We are so grateful to report that our son Noah has been progressing well during his treatment and the doctors are very optimistic about the future for our little boy.”

The mistake was noticed by The Sun on Friday, as fans reacted with horror.

One viewer ranted: “Michael Buble is amazing! What he did on stand up to cancer was amazing! Channel 4 let him & his beautiful family down!!!! Big time!! U should be ashamed! Cancer is the biggest struggle & fight for anyone but to misinterpret it is massive!!”

Another tweeted: “You wrongly tweet about the death of Michael Buble’s Son?”

Others chose to focus instead on the amazing interview and the singer’s bravery.

One tweeted: “Massive respect to Bublé on Channel 4 right now, the strength is unreal”, while another said: “Michael Buble on channel 4, what a top bloke. Really grounded, emotional, humbling and inspirational 🙂.”

A third addressed interviewer, James, writing: “One of your best James and for such a good cause Well done to everyone involved in @StandUp2C”.

The Canadian singer, 43, stepped away from his work in 2016 after Noah was diagnosed.

He has been open about the impact his son’s diagnosis had on him, even recently revealing plans to retire.

Speaking to the Daily Mail, he explained: “I don’t have the stomach for it any more. The celebrity narcissism. This is my last interview. I’m retiring.

But Michael – who welcomed a third child earlier this year, with his wife Luisana Lopilato – made an exception for Channel 4’s Stand Up to Cancer event.

Channel 4 has been working with Cancer Research on their Stand Up To Cancer campaign, encouraging fans to donate.

You can find out more and donate by visiting the website here.

Did you watch Stand Up to Cancer? Leave us a comment on our Facebook page @EntertainmentDailyFix and let us know what you think.