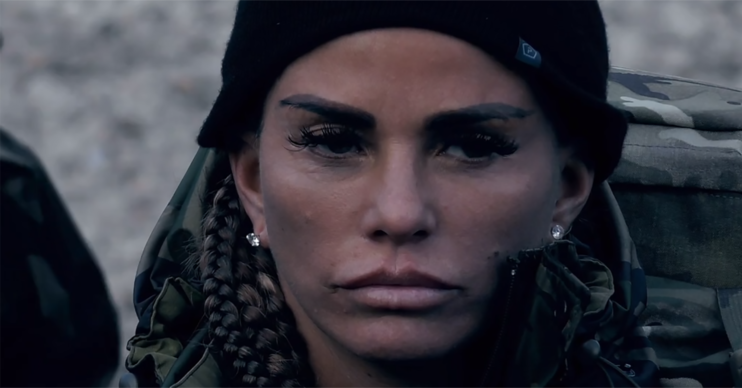 Celebrity SAS: Who Dares Wins viewers were left in hysterics as Katie Price flashed her nipple.

The reality TV star was already thrown into the deep end during the first episode on Monday night (April 20).

However, not long into the show, Katie accidentally flashed her nipple as she changed into her dry gear.

Viewers shared their thoughts on Twitter after the hilarious mishap.

One person said on Twitter: “Watching Celebrity @SAS_WDW and @KatiePrice’s nipple fell out.”

Another wrote: “@KatiePrice getting ripped to pieces on #SASWhoDaresWins already seen nipples!”

A third added: “Not even 20 mins in and @KatiePrice has to get a nipple out on #CelebritySASWhoDaresWins.”

Meanwhile, Katie opened up about being held at gunpoint in South Africa.

Speaking to Ant Middleton, she said: “I’m not here for sympathy, I’m just saying, I have been through a lot of [expletive] and I’m still going through it.

Not even 20 mins in and Katie Price has to get a nipple out.

“I don’t even know where to start. My fifth kidnap threat happened two weeks ago. Then my mum being told she was terminally ill last year.

“My horse escaped on my front road and died in my hands.

“Then held at gunpoint in South Africa with my kids.

“That’s the first time I’ve ever had a proper gun to my head thinking we’re going to die. [Expletive] horrific.”

The former glamour model insisted she has “to be the strong one” to cope in difficult situations.

She explained: “That’s the only way I deal with it, I have to be the strong one.