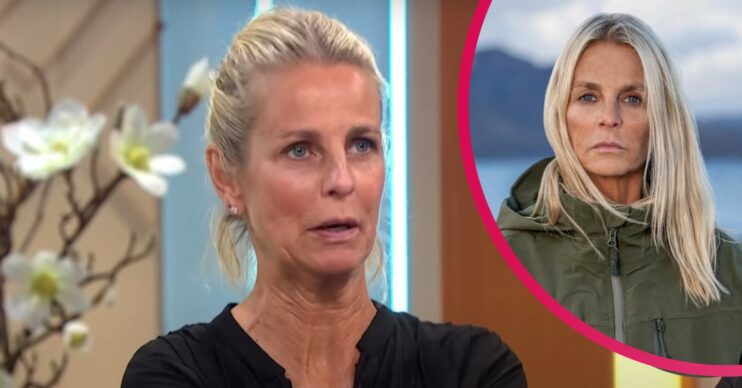 The mum-of-four described it as a 'taboo'

As a participant on Celebrity SAS: Who Dares Wins, Ulrika Jonsson barely has time to catch her breath.

Constantly on the go, undergoing gruelling tasks designed to put the special forces through their paces, the focus is on just making it through.

But Ulrika seems the perfect celebrity for this show.

Always game for anything presented to her (see Shooting Stars) and unfailingly open (see her tabloid columns), the TV presenter seems to be the ideal candidate to roll up her sleeves and crack on.

But that’s not to say the mum-of-four doesn’t experience moments of self-consciousness.

Indeed, in 2009 she told the Daily Mail how an ’embarrassing’ health condition made her self conscious.

She even described the silence around the intimate issue as a reason to regard it as “the last taboo”.

But what was Ulrika referring to?

Celebrity SAS star Ulrika Jonsson: What condition did she open up about?

In a lengthy article, Ulrika revealed she had suffered with light adult incontinence, or having a sensitive bladder.

She admitted such a condition could be considered funny if it wasn’t so serious.

Ulrika also reported that, at the time, LAI affected nearly five million women under the age of 40.

She wrote: “You won’t see it mentioned in any manuals. Mothers like me have been left to think that it was just one of those things we are supposed to put up with.”

A post shared by SAS: Who Dares Wins (@sas_whodareswins)

How did LAI affect Ulrika?

Ulrika continued: “As the mother of four children, it would have been divine intervention, if not a miracle, if I had escaped childbirth this many times without some damage to the muscles and tendons supporting my bladder. And, trust me, I haven’t escaped.”

She also admitted she “struggled hard” to not lose control in the later stages of pregnancy.

However, Ulrika was shocked to discover, after giving birth, that this did not correct itself.

Mothers like me have been left to think that it was just one of those things we are supposed to put up with.

Nonetheless, what moved Ulrika to open up about her LAI was the realisation that nobody was talking about the issue. Not even her – and Ulrika considered herself uninhibited.

Ulrika reflected: “I can’t bear the thought of women suffering alone, in silence and feeling so alienated by this condition through absolutely no fault of their own. I mean, there is nothing adult about panicking every time you laugh or sneeze and feeling that you’re losing control, so it’s so easy to understand the stigma.”

How Ulrika treated her LAI

Ulrika wrote at the time that over 70% of women that endure LAI can be helped.

And luckily for her, she was among that number.

Ulrika noted she ‘slaved away’ at pelvic-floor exercises recommended by her obstetrician. This meant she was in control once again within a couple of months.

She also recommended sufferers consult a urogynaecologist if the exercises don’t work to discuss options, including surgery.