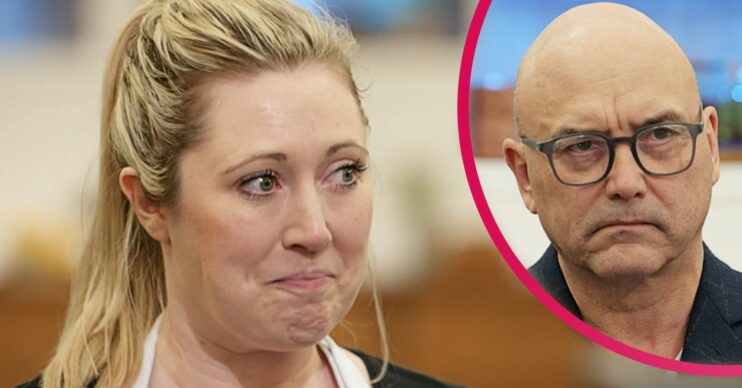 Things looked to be going well for the former Coronation Street star, 31, but it all unravelled very quickly.

After losing Will Kirk in Monday night’s episode, it was Katie Price, Dion Dublin, Melissa and Joe Swash left to do battle in the kitchen.

They faced a knowledge and a skills test last night.

Read more: Celebrity MasterChef: Who did Melissa Johns play in Coronation Street? What happened to her arm?

In the opening test, the cooks had to rustle up a corn fritter with a poached egg and smashed avocado.

While she didn’t quite get the egg right, it wasn’t a complete disaster.

Next, star chef Sabrina Gidda asked the contestants to cook one of her favourite recipes.

Melissa had to make a dessert – hot chocolate mousse with cardamom custard gelato and cardamom and pistachio strudel.

And she smashed it, with Sabrina saying the ice cream was as good as anything that would come out of her own kitchen.

However, a final round consisting of chicken curry didn’t go down well.

And soon, Melissa was on her way.

Melissa was robbed. Jon and Greg , give up , your wrong again .#CelebrityMasterChef

Yet again, they got it wrong! #CelebrityMasterChef

Sorry that's a joke #CelebrityMasterChef . Why bother having other rounds over the hour then kick out someone solely on the final dish? Totally wrong decision.

What did viewers say after Melissa’s elimination?

One viewer fumed on Twitter: “Melissa was robbed. Jon and [Gregg], give up, [you’re] wrong again #CelebrityMasterChef.”

“Why bother having other rounds over the hour then kick out someone solely on the final dish? Totally wrong decision.”

A third said: “Melissa was robbed. John and Gregg, give up, you’re wrong again.”

Another added: “Melissa was robbed.”

However, others think it was the right decision as one said: “Melissa really screwed up there. She was doing so well.”

Another tweeted: “There is a long history of it being judged on the last dish (usually their own menu), and that being the case Melissa performed worst.”