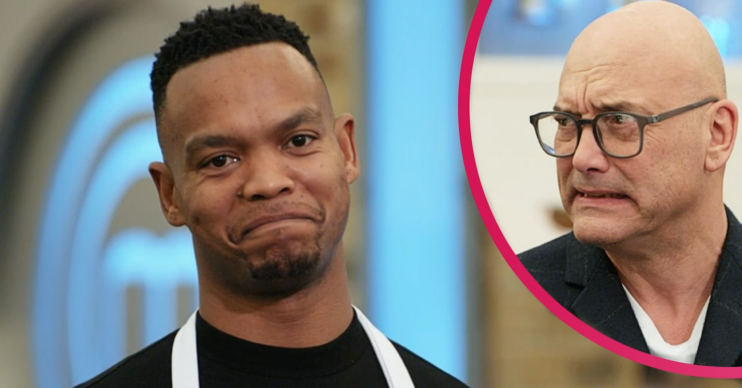 The 34-year-old was given the boot last night (Thursday September 2) after his stuffed aubergine left judges John Torode and Gregg Wallace cold.

However, viewers branded the decision a “farce” and thought Kem Cetinay should’ve gone instead.

What happened with Johannes on Celebrity MasterChef last night?

In last night’s episode, Johannes, Kem, Gavin Esler and Kadeena Cox all battled in the kitchen so they could progress to the next stage.

And, in a tense and closely fought heat, only Kadeena distanced herself from the crowd.

The signs that Johannes could be in trouble appeared in a dessert round.

Having to make a brandy snap with clementine cream and ginger buttercream, Johannes’ cream was deemed “inedible”.

And finally, his vegetable-based dish – a South African relish called chakalaka made with baked beans and a “soggy” stuffed aubergine – didn’t cut the mustard.

But it wasn’t just Johannes who had a shocker – it was Kem, too.

#CelebrityMasterChef, absolutely no point in having the previous rounds if you are going to ignore the outcome. Johannes was way better than Kem all the way through. Ridiculous decision!!

There is NO way Kem is better than Johannes, im really upset and I think the judges were totally wrong #CelebrityMasterChef

How did viewers respond to John and Gregg’s decision?

Angry viewers took to Twitter to express their fury at the decision.

One fumed: “That’s it. No more viewing of this series. Total farce with tonight’s outcome.

“They clearly have their favourites no matter how they cook. Johannes should still be in and Kem clearly not. #CelebrityMasterChef.”

Another wrote: “#CelebrityMasterChef, absolutely no point in having the previous rounds if you are going to ignore the outcome.

“Johannes was way better than Kem all the way through. Ridiculous decision!!”

A third disgruntled viewer said: “There is NO way Kem is better than Johannes.

“I’m really upset and I think the judges were totally wrong #CelebrityMasterChef.”

Some thought Johannes should have gone

However, people weren’t totally convinced it was a wrong decision.

One argued: “See a lot of people on here [are] not happy about Johannes not getting through…

“But as much I love the guy, you can’t put baked beans in a dish on MasterChef, it’s just a few notches off serving up a pot noodle as far as I’m concerned.”

“Nelson Mandela came up from the grave, kissed his teeth and sat back down #CelebrityMasterChef.”