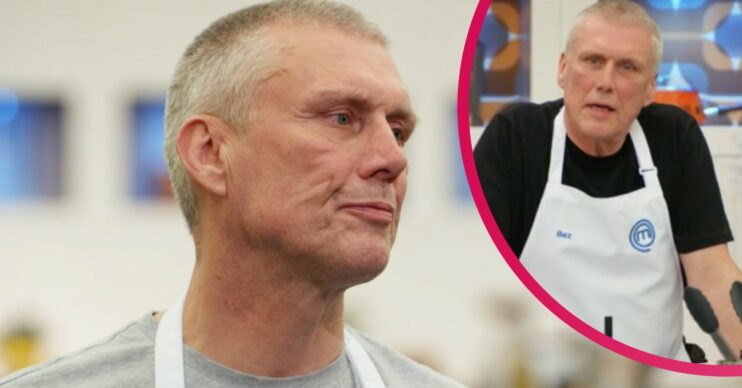 Celebrity MasterChef viewers threaten to ‘switch off’ as Bez is eliminated

Celebrity MasterChef viewers were left furious last night (September 9), as Bez was eliminated from the competition.

The Happy Mondays star, 57, was a firm favourite on the BBC One series, with some even calling for him to win.

However, he failed to impress judges John Torode and Gregg Wallace on Thursday’s edition.

During the first challenge, Bez received some criticism for his monk fish and black rice dish.

John pulled the musician up for not reading the recipe, before critiquing his overcooked fish.

Following the assignment, Bez reflected: “I messed right up there!

“I didn’t quite do the plate the justice I should have done, but I really enjoyed learning something new.”

In the next round, Bez’s flatbreads were a cause for concern with the judges.

He explained he rushed the dish after ultimately running out of time.

In the end, John and Gregg decided to send home Bez.

The Happy Mondays star appeared gutted over the decision, but admitted the experience was “great”.

But viewers were left raging over his departure.

On Twitter, one complained: “Not watching as Bez is gone, don’t mind who wins as long as it’s not Kem. Knows nothing, cooks nothing other than Turkish, normally Greg and John are right on someone cooking same old. Lost count as to how many times he’s made koftas.”

Another said: “Genuinely gutted Bez went tonight – probably the most instinctive chef there, consistent from Day 1 & genuinely interested in food & flavours, whereas a few of the others are just 1 new recipe ahead of the game every time.”

A third added: “Just woken to see #Bez is out #CelebrityMasterChef not sure I can watch it anymore.”

#justiceforbez #CelebrityMasterChef Why did they eliminate Bez?? It’s an outrage! Wanted him to win.. He’s a total legend.. Me thinks it’s a FIX! #bringbackbez

Just woken to see #Bez is out #CelebrityMasterChef not sure I can watch it anymore.

Bez should still be it!! Robbed #CelebrityMasterChef

Bez you were robbed mate, not gonna to bother watching anymore. Should be called EssexChef. #CelebrityMasterChef

A fourth wrote: “Gutted that Bez is out – so that’s the series link off then! #CelebrityMasterChef.”

In addition, a fifth said: “Gutted that Bez is out #CelebrityMasterChef.”

Another raged: “Bez should still be it!! Robbed #CelebrityMasterChef.”

Not watching as Bez is gone!

However, one commented: “Sorry to see Bez go last night. He’d had a good run but soggy flat breads were his down fall.”

As Bez left the competition last night, six celebrities are through to the last round of the semi-finals.