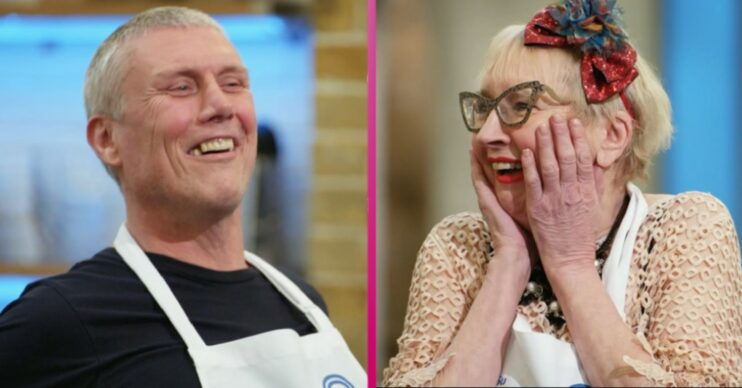 There are calls for the duo to have their own show

Celebrity MasterChef 2021 viewers have shared their delight after Bez and Su Pollard made this year’s semi-finals.

Happy Mondays star Bez and actress Su sailed through to the penultimate round on Friday night.

Read more: Celebrity MasterChef: All the winners and all of their best, lip-smacking dishes in the competition

And fans were also left chortling away at their hilarious personalities – with some even thinking they deserve their own show.

Taking to Twitter after the results were revealed, one viewer gushed: “@SuPollard and Bez are absolutely adorable. Bez is so matter of fact and Su just brightens up everyone’s day. Please keep them both in!”

Another wrote: “Yaaaay! @Su_Pollard and @bez_Beerspotter are through to the next round. I’m delighted!”

A third said: “I want Bez and Su to have their own show, any show, just keep them on my tv, preferably together. Twisting Melons at Butlins maybe.”

After the pair discovered they were through to the semi-finals, they celebrated with an ‘air hug’.

Making reference to the sweet moment, another viewer tweeted: “Who knew that #celebritymasterchef could provide such wholesome content as a Su Pollard and Bez air hug?”

Celebrity MasterChef 2021: What did Su cook?

Su and Bez were up against Blue singer Duncan James in Friday night’s quarter final episode.

All three had to cook a two-course meal for former MasterChef winners Kimberly Wyatt, Riyadh Khalaf and Angelica Bell.

Su was first up, making a fancy Chicken Parmigiana main and a bread and butter pudding with hot-cross buns and pain au chocolate.

She served her dessert with brandy cherries and mascarpone – or “Mascara-pony” as she called it.

Su reflected on her time on MasterChef as she got to work, saying: “It’s been fabulous. My friends can’t believe it.

While cooking her chicken, the former Hi-De-Hi star quipped: “I’ve now got to assemble the chicken and spoon over enough sauce for each breast. Not mine, the chicken.”

However, he had to ditch the chips after “messing them up”.

He said: “I’m a bit gutted because I messed me chips up. But I think it’s not a bad effort and I did me best [sic].”

Despite his faux pas, Bez’s sea-bass hit the spot and his pudding of rum and pineapple Panna cotta went down a treat.

After hearing he was through to the semi-finals, Bez said: “It’s kind of a miracle. I’m buzzing me socks off. I can’t actually believe I’m stood here [sic].”

Su added: “I would just never have thought I’d be in the quarter final, let alone going into the semis. I’m just like, wow, I’ll do a celebration tonight!”

Who do you think will win Celebrity MasterChef 20201? Leave us a comment on our Facebook page @EntertainmentDailyFix and let us know!