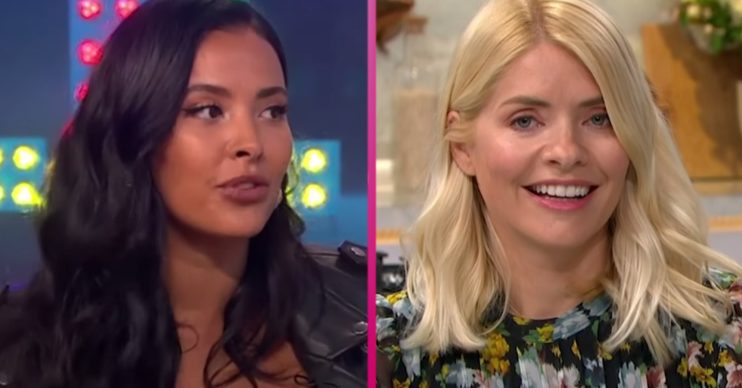 Celebrity Juice: Holly Willoughby to be replaced by Maya Jama?

Maya Jama has been tipped to replace This Morning presenter Holly Willoughby on Celebrity Juice.

TV star Maya shared with her fans earlier this week how she has been working with Celebrity Juice host Keith Lemon.

The former Radio 1 host teased further developments would be ‘coming soon’ as she posed with the comedian.

She pulled a series of silly faces in snaps with Keith and hailed spending time with him as “fun”.

What did Maya Jama say about Celebrity Juice?

Maya also indicated she’s formed a strong bond with the outlandish comic after admiring his work for a long time.

Read more: The Chase viewers fuming as they sit through ‘most annoying’ episode

All of this has led her fans to reckon that viewers could be seeing her as permanent addition to forthcoming episodes of Celebrity Juice.

Wanted to be just like him when I was in school and even when I started my career.

Maya captioned the snaps on Insta: “Working with this one today was very fun.

“Wanted to be just like him when I was in school and even when I started my career.

Maya Jama’s fans back her for Celebrity Juice

Maya’s Instagram followers were quick to speculate that the Save Our Summer host could be in line to take over from Holly.

ITV darling Holly quit as a team captain on the ITV2 series earlier this year to spend more time with her family.

One fan asked: “Are you going to be a new captain on celebrity Juice? Really hope so.”

“Have to see this pair together on Juice in the future,” requested yet another hopeful fan, added a praying emoji to their remark.

And somebody else added: “Please tell me you’re on Celebrity Juice. I’ll start watching it again haha.”

Working with this one today was very fun.. 🤣Wanted to be just like him when I was in school & even when I started my career.. now we’re basically bezzies.. coming sooooon

It seems the bookies also believe Maya could be in line for the vacant team captaincy.

According to The Sun, Ladbrokes has priced Maya at 5/6 to bag Holly’s former role.

A spokesperson reflected: “Maya’s personality, humour and attitude is perfect for Celebrity Juice and the odds suggest it’s a no-brainer that she will be one of the next captains.”

Keith previously hinted the show may not survive Holly’s departure.

He said in May: “Everyone keeps asking me who the new captain is.

“But I don’t know what the future of Celebrity Juice is at the moment, it’s a lot of meetings.”

Asked to clarify that there would be another series of the show, Keith continued: “I’m probably supposed to say it’s meant to come back, lead with positive words but we’ve got to get it right.

“The next phase has to be right I guess.”