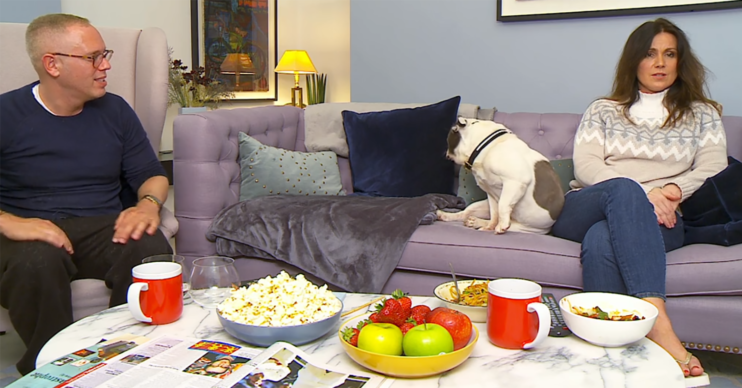 The TV presenter did want the pooch on her lap

Celebrity Gogglebox fans turned on Susanna Reid after she refused to have a snuggle with Judge Rinder’s dog.

The Good Morning Britain presenter is among the stars commenting on the latest TV offerings on the Channel 4 show.

She is teamed up with close friend Rinder, whose pet pooch has been joining in the fun.

But it seems Susanna’s fondness for her pal doesn’t extend to his dog, as she made it clear she didn’t want to get too close.

The pair had been watching a moving clip involving a dog and the Judge asked Susanna if it made her want to spend some time with Rocco.

“Why don’t you just have a cuddle?” he asked, but Susanna insisted: “I don’t want the dog on my lap!”

As Judge Rinder put Rocco next to Susanna she patted him a couple of times before taking her hand away.

“What’s wrong with @susannareid100? She can’t give the dog a cuddle?” asked one baffled viewer on Twitter.

“Susanna not wanting to cuddle Rinder’s dog upset me. Ngl,” tweeted another.

“Susanna Reid telling Judge Rinder to get his dog away from her…” said another viewer, sharing a string of shocked emojis.

My boy the Ladies man. I still love him for who he is. #Gogglebox #outtakes . pic.twitter.com/0nDPJfdjDV

“Susanna what has that poor dog done to you, he just wants to cosy beside you, shame,” said another person who had tuned in.

Susanna and Judge Rinder have been friends for around six years after he was a guest on Good Morning Britain.

The pair often go on holiday together during the presenter’s summer break from the programme.

She has previously said of their adventures: “Oh, we let our hair down!”

“That’s my four days in the year when I have no responsibilities,” she told You magazine.

And Judge Rinder once joked to Closer magazine: “I love to go away with Susanna once a year. We have more plans to go away, but I won’t say where. The two of us try to keep it to ourselves – Susanna and I only go on holiday for the sex!”

He added: “It is just me and Susanna, and we have sex morning, noon and night!”

Judge Rinder later clarified that he did not mean with each other.

He tweeted in reference to another article claiming the pair enjoyed spending time together and having sex: “Perfectly true: Except the booze and sex part.”