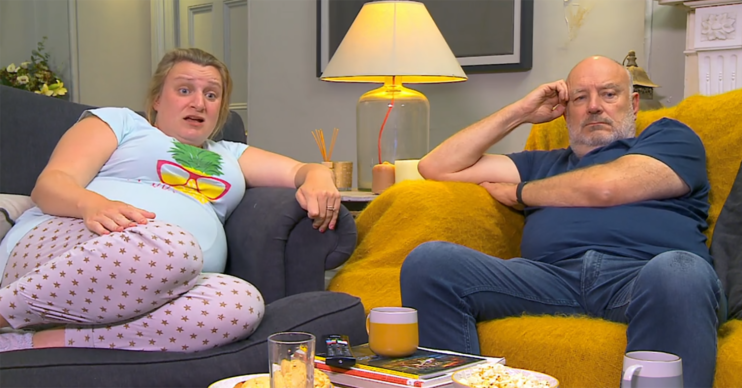 "Daisy May Cooper is the favourite I didn't know I was missing!"

Viewers of the latest episode of Celebrity Gogglebox met a new face; This Country star Daisy May Cooper. It didn’t take long for her to win fans either.

The straight-talking comedian made her debut on the hit Channel 4 show, and was quickly described by viewers as “brilliant” and “hilarious”.

Read more: Eamonn Holmes’ fans gush over ‘beautiful’ photos of him and his daughter

Celebrity Gogglebox featured many of the pairings viewers were used to seeing including Judge Rinder and Susanna Reid, and Denise Van Outen and partner Eddie. Daisy and her dad Paul made their debut and were an instant hit.

Daisy and Paul appeared from their home in The Cotswolds as the pregnant star watched the programmes in her pjs.

The comedy star is expecting her second child with partner Will, but chose to appear with father Paul Cooper instead.

Whilst it was her debut show, the This Country star quickly settled in and her cursing and blunt comments quickly won over viewers.

One said: “I love Daisy May Cooper so much! She’s hilarious.”

Another shared: “#CelebrityGogglebox Daisy May Cooper is the favourite I didn’t know I was missing!!!”

Daisy May and her dad are just brilliant.

A third said: “Daisy May and her dad are just brilliant.”

One viewer loved the realness of Daisy’s pyjamas outfit: “I love the fact that Daisy May Cooper doesn’t give a [bleep] that she’s on the telly and she’s in her pj’s. Who dresses to watch TV anyway? I’m straight into comfies as soon as I’m in from work.”

Some fans even dubbed the 34-year-old as “the next Kathy Burke” for her straight to the point attitude:

Daisy May Cooper – the next Kathy Burke 😍😍 #CELEBRITYGOGGLEBOX

Not everyone was a fan though

Although Daisy won many viewers over with her humour, there were plenty who didn’t understand who she was. Some Gogglebox even mistook her and dad Paul for non-celebrities.

One tweeted: “Daisy [bleep]…. I didn’t have a clue…. assumed they’d added a random in with the celebs by accident! #stilldontknowher.”

Another said: “Ok watching #CelebrityGogglebox BUT who are Daisy and Paul.”

A third shared: “NGL I don’t know who daisy is.”

Who is Daisy May Cooper?

The actress also had a role in the 2019 film The Personal History of David Copperfield.