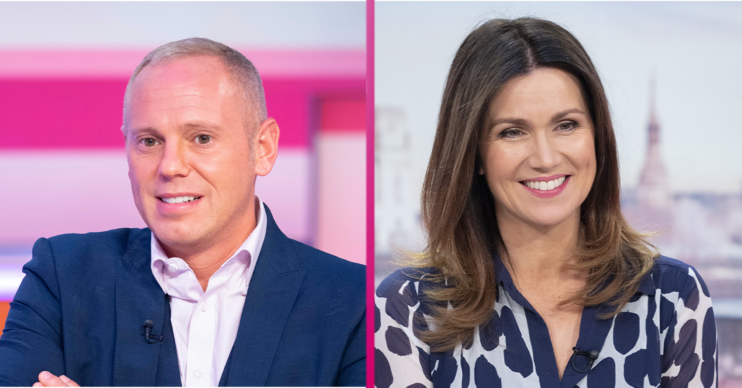 GMB star made her first appearance with her ITV pal

The new sofa dwellers got stuck into watching Planet Earth II, Breaking Dad and the classic EastEnders ‘Sharongate’ episode amidst other shows from the past week.

And viewers adored the pair’s appearance…

Great to see @susannareid100 & @RobbieRinder on #CelebrityGogglebox Two of the smartest & nicest on tv..great pairing. Shaun & Baz, Denise & her lovely bloke & Rylan & Mum are great too Love this show..feet up, glass of wine & nibbles tv 😘👍

Hello @susannareid100 and @RobbieRinder – just when you thought #CelebrityGogglebox couldn’t get any better. So excited by this pairing 💕xx

Announcing his stint with Susanna last month, Rob, 42, told The Sun: “I am very grateful to Celebrity Gogglebox for ensuring Piers Morgan will only be the second most important man in my dear friend Susanna’s TV life from now on.”

How are Susanna Reid and Judge Rinder friends?

Susanna became friends with barrister Rob after he was a guest on GMB in 2014.

They even holiday together in Ibiza during her summer break from the show.

Two of the smartest and nicest on TV… great pairing.

She has previously said: “Oh, we let our hair down. That’s my four days in the year when I have no responsibilities.”

Susanna, who is pretty much teetotal, admitted she fell off the wagon on the party island last year!

Earlier this week, the 49-year-old spoke of her trepidation about doing the celeb spin-off of Gogglebox, telling GMB co-star Piers Morgan: “We’ve not got any control over the editing.”

Piers teased: “As our friend Eamonn found out, that editing can be savage.”

He was referring to ITV bed fellow Eamonn Holmes’ upsetting experience on the show early this run.

Channel 4 was forced to apologise after the This Morning presenter criticised the programme for an “idiotic and cruel edit” after his appearance in the first episode alongside wife Ruth Langsford.

Susanna took Thursday off from presenting duties on GMB to prepare for Celebrity Gogglebox. The journalist admitted she had “hours and hours” of TV to watch.

It seems the mum of three is juggling a lot of balls at the moment – aside from her additional TV work, she has reportedly reunited with an old flame.

But there were reports earlier this week that they have now reunited.

What did you think of Susanna and Rob’s turn on Celebrity Gogglebox? Leave us a comment on our Facebook page @EntertainmentDailyFix and let us know what you think of this story.