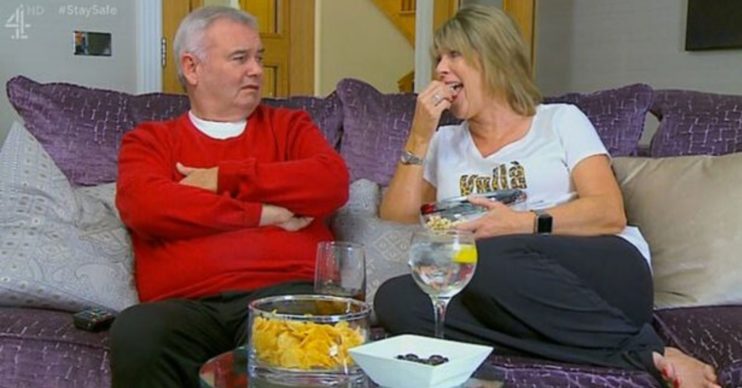 Viewers saw a different side to Ruth Langsford on last night’s Celebrity Gogglebox (June 19, 2020), with even her husband Eamonn Holmes shocked when she made an X-rated confession.

The couple, who present This Morning together, were watching an episode of Channel 4’s Sex in Lockdown: Keep S******g and Carry On, which was looking in to how the UK kept things exciting during the pandemic.

One particular segment of the show revealed the household objects that people have been finding inventive uses for. Presenter Anna Richardson said that the top household items that people had been using through lockdown included a hoover, a spatula and a feather duster.

But Ruth had one better, confessing that she had once found an alternative use for a tumble drier.

While watching the show, Ruth turned to her husband, saying: “My friend had the old style spin dryer that used to move around, so you’d have to sit on it to keep it still.

A confused looking Eamonn said: “And she told you that?”

Ruth replied: “We used to sit on it together.”

Eamonn’s jaw dropped in disbelief, with Ruth just quietly chuckling at his shock.

She then went in to the kitchen to bring back a household item of their own, coming back in to the lounge with what looked like a lemon squeezer.

Ruth is a dirty devil.. with that lemon juicer 🤣🤣🤣🤣 #gogglebox

Another said: “I’m [bleep] myself laughing at Ruth but I can’t look at a washing machine in the same way again!”

Others to appear in the latest series of Celebrity Gogglebox including Martin Kemp and his son Roman, Happy Mondays and I’m A Celeb star Shaun Ryder and bandmate Bez and Radio One’s Nick Grimshaw and his niece.

What did you think of Ruth’s comment? Visit our Facebook Page @EntertainmentDailyFix and let us know what you think.