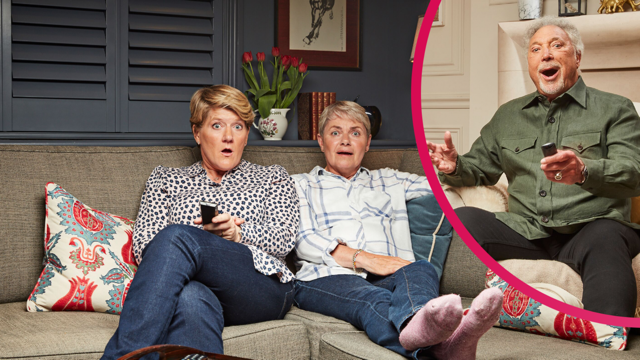 Celebrity Gogglebox cast: All the new celebrities appearing as the show returns

The channel has confirmed several famous faces who are appearing...

Here’s all you need to know!

When is Celebrity Gogglebox back on C4?

The new series of Celebrity Gogglebox starts on Friday June 04, 2021 at 9pm.

It will be the third series of the Channel 4 show.

Celebrity Gogglebox cast: Who is taking part in series three?

Denise Van Outen and her partner Eddie Boxshall are returning to the sofa in Celebrity Gogglebox.

The Essex couple were a big hit with viewers in previous series as a result of their tongue-in-cheek comments and sometimes brutal honesty.

Nick Grimshaw will also be back filming from his sofa.

He’ll once again be joined by his niece Liv.

Confirming the news on Lorraine, Nick revealed he hadn’t seen his niece since they last filmed Celebrity Gogglebox.

He blamed the coronavirus pandemic.

Talking on Monday morning’s show (May 24 2021), she expressed nerves about taking part but excitement about the free crisps the celebs are provided with!

She said: “Rosie and I have been asked to do it and we love the show so much so we thought let’s just do it.”

Mo Gilligan and Babatunde Aléshé will also be taking part again, as will the broadcaster Gyles Brandreth and Corrie actress Maureen Lipman.

Former premiership footballers Micah Richards and Jamie Carragher have signed up, too.

Read more: Jenny and Lee from Gogglebox have fans fearing the worst as they separate

Who has taken part before?

How can I watch Celebrity Gogglebox?

Viewers can watch Celebrity Gogglebox on C4 at 9pm on Friday June 04 2021.

Episodes will be available to watch online afterwards via C4’s on-demand service All 4.

When is the normal Gogglebox back?

The main version of Gogglebox, featuring ordinary members of the public, will return for a new series later in the year.

C4 confirmed that Gogglebox is to return for an 18th series, after the Malone family let the news slip in a new video.

The family said on Instagram that they were sad this series was coming to a close – then they added that they’d see viewers again in September.

Mum Julie said: “Well that’s it for this series. Have a good summer, and we’ll see you all in September.”

Gogglebox usually gets two series per year – one starting in March and one in September.

Celebrity Gogglebox begins on Friday 04 June at 9pm on C4.