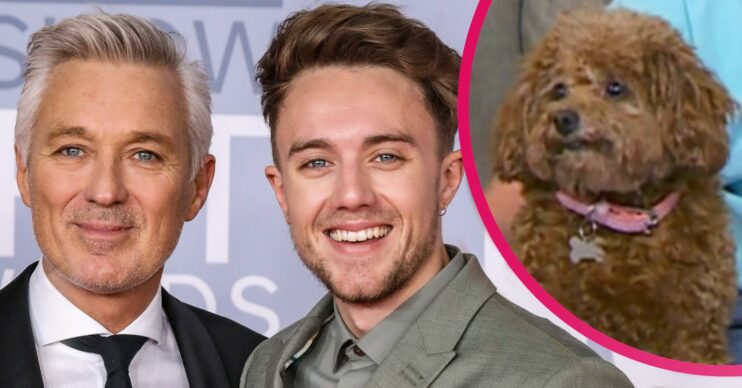 Celebrity Gogglebox cast: How Martin and Roman Kemp’s dog was rescued from the meat trade

Iris had a tough start to life

Martin and Roman Kemp are currently starring as cast members of the latest series of Channel 4’s Celebrity Gogglebox.

And the father and son duo introduced their little rescue dog – Iris – in episode one.

Martin, 59, and Roman, 28, sought comfort from the tiny toy poodle during a harrowing episode of  Supervet.

But their pooch also has a sad tale, but one that ultimately had a very happy ending.

Iris is a rescue dog that was saved from the meat trade in China.

Where is Martin and Roman’s dog from?

Martin and his wife Shirlie, 59, adopted Iris back in September of last year.

She travelled all the way from China to Rushton Dog Rescue in Weymouth.

Saved from the dog meat trade, all of her hair had to be shaved off when they first took her into care.

She’d been in their care for almost a year when charity ambassador Shirlie fell in love with her during a visit.

Taking to Instagram at the time, Shirlie shared: “Had a lovely visit to @rushtondogrescue yesterday and fell in love ❤️ Iris the toy poodle who was rescued from China’s dog meat trade by Rushton ….I think she might like it at my house! #toypoodle #rescuedog #dogmeattradesurvivor #rushtondogrescue #poodle #putabowonit.”

And just a few weeks later she revealed how well the dog had settled into their family.

What has Shirlie Kemp said?

Shirlie updated her fans with: “Thought I’d give a little update on Iris who we rescued from @rushtondogrescue

“We will never know what trauma she has been through but she sure knows that she is safe now.

“She adores cuddling and has settled into our home so quickly. It’s so nice to give a dog a new home and a big thank you to Rushton for saving her too.”

Including: “Iris settling into the Kemp home really well..Thank you so much @rushtondogrescue for finding our little girl!!!”

Finally the charity was understandably delighted that Iris found such a loving and glitzy home.

At the time of her adoption they posted on Facebook: “Shirlie Kemp fell in love with Iris our little meat trade survivor, who is as cute as a button!!

“Iris has now been adopted by Shirlie Kemp & Martin Kemp and we couldn’t be happier for them all!! Iris has a new poodle sister called Pops and they love each other.

“We’re so lucky to have such a kind caring person who understands why we do what we do involved in our charity. Iris is going to be a great ambassador for Rushton and will be telling everyone about what happens in China and her story!

“Iris you are going to have the BEST life ever! Go be happy baby girl you deserve every second.”

What do you think of the Celebrity Gogglebox cast for 2021? Let us know on our Facebook page @EntertainmentDailyFix.