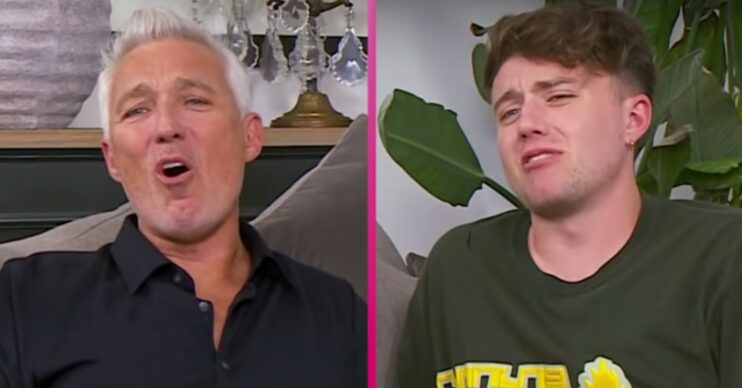 But did Martin go too far with his banter?

Celebrity Gogglebox 2021 viewers were left cringing after Martin Kemp had a rather unusual wind up for Roman Kemp.

The father and son pair are much-loved famous faces on the couch potato critic Channel 4 series.

But comments made by Martin during last night’s (Friday July 2) episode left some fans squirming with embarrassment.

Martin’s ‘cringeworthy’ aside came as the two Kemps watched 1980s flick Back to the Future together.

Reflecting on the slightly awkward time travel plot point that sees character Marty McFly’s mother – as a young woman – show interest in him, Martin dived straight in to raise an unwanted hypothetical situation with his lad.

Read more: Jonathan Ross on Celebrity Gogglebox: Who is his daughter Honey? What did he say about her weight?

“Oh – you would have fancied mum, though, back in the day,” Martin piped up as the two spreadeagled over the sofa.

“Urggghhh… don’t even… why would you say that?” Roman shuddered, clearly not wanting to continue the conversation.

Martin, however, enjoyed prodding his son and continued, despite protests: “I’m just saying you would’ve though…”

And once he knew he could get a rise out of Roman, Martin seemed to tease his boy with glee.

“Please stop saying that,” Roman repeated – throwing his head back and closing his eyes with a sour look – before firmly demanding his dad stop.

Many of those watching at home expressed their feelings about the gag on social media. And several had plenty of sympathy for Roman as his dad ‘showed him up’.

One person tweeted: “Felt a bit uncomfortable for the youngster there.”

“Who says that to their son, that’s weird,” remarked another observer.

And a fourth person echoed: “Bit of a weird strange thing to say to your own son. No wonder Roman walked out of the room when Martin kept going on about it.”

However, others were amused by Martin’s banter.

“A great lesson in how to make your son feel awkward. One up for the dads.”

Someone else remarked: “Martin cringing out Roman at every opportunity is every parent’s dream.”

And another viewer joyfully admitted: “Mum and I died laughing at this haha.”