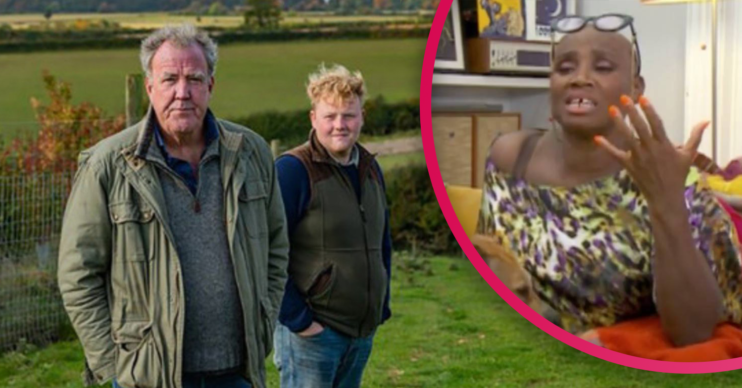 Clarkson's Farm was up for review on couch potato critic show

And, as part of the episode watched by celebrities on the latest instalment of Celebrity Gogglebox, he was seen on hand as sheep gave birth.

Not all of the couch potato critics were enthusiastic about reviewing Clarkson’s Farm.

And a scene in which the tabloid columnist attempted to assist with dozens of pregnant sheep particularly caused a reaction.

That’s because Clarkson panicked, causing several Goggleboxers to joke about his suitability for the role.

Chef Andi Oliver also quipped that Clarkson was way out of his depth.

“Poor thing, I couldn’t think of anything worse than being in labour and the only one to help you is Clarkson,” she said.

Imagine having Jeremy Clarkson at the birth of your child.

However, she was soon annoyed by Clarkson’s gags.

And some social media users suggested the jokes might be “misogynistic”.

What did Clarkson say to irritate Gogglebox viewers?

Before too long, Channel 4 viewers saw Clarkson joking about how a ewe wasn’t “shouting” during birth.

He also indicated the sheep was able to endure this stage of the miracle of birth “without an epidural”.

However, this did not amuse the Goggleboxers. Ex EastEnders star Martin McCutcheon warned the host to be “careful”.

And Andi fumed to daughter Miquita that she “hated” Clarkson: “Did you hear what he just said? ‘No epidural, no shouting’.”

One furious Twitter user wrote: “It was foolish of me to give @JeremyClarkson a minute.”

They also claimed he was responsible for “anti-women misogyny”. They seethed: “When is this guy getting sacked off our screens forever? #Gogglebox.”

Someone else joked: “Imagine having Jeremy Clarkson at the birth of your child, poor sheep #Gogglebox.”

And a third person tweeted: “LOL Andi Oliver saying she hates Jeremy Clarkson on #Gogglebox what a legend.”

Celebrity Gogglebox airs on Fridays on Channel 4 at 9pm.