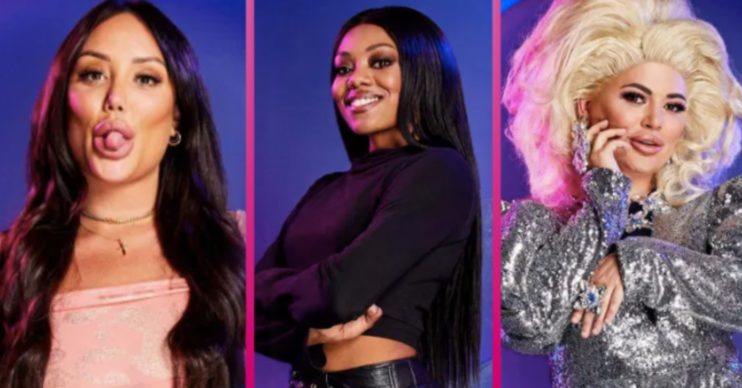 Celebrity Circle 2021 is about to kick off its third series.

And it is all for a great cause.

This year it is airing on Channel 4 in aid of Stand Up To Cancer.

But who is on this year’s celebrity line-up? Get to know these celebs…

Denise had to bow out of Dancing on Ice due to shattering her shoulder – but now she’s back on top form for The Circle. Getting her big break on The Big Breakfast, she’s an actress and television host that’s been in the media eye for decades now.

She said: “I like the show anyway. I caught Richard Madeley on it the last time I was watching, and I thought it was really fun, so yeah, just can’t wait to get started.”

Charlotte said of joining the line-up: “I’m so excited. I am such a huge fan of The Circle. I just love TV, I’m one of those people who has seen every single reality show.”

Do you remember Saffron Barker on Strictly? She competed on Strictly Come Dancing in 2019. And she also happens to be a huge YouTube star. In fact, she has over two and a half million subscribers.

But she says she is a bit nervous about the show: “I’m really excited. I feel a bit nervous because I’ve never lived on my own before, I still live with my family.”

Real name Leo Loren, Baga says The Circle has huge appeal: “Since Drag Race, I’ve been given all these opportunities and I was just like, ‘You know what? I’m actually a fan of that show.’

After competing on Dancing on Ice, Lady Leshurr is now ready for The Circle.

She said: “It’s crazy, really. My emotions are all over the place. I’m a bit nervous, but at the same time, I’m quite excited. I’m looking forward to giving TV the entertainment that they’ve been dying for – I’m very excited.”

Former Blue star turned actor is ready for The Circle.

He said he’s happy to be on the show as it’s a chance to get out during lockdown.

Duncan explained: “It’s nice to actually get out the house and do some work, just something to escape from the lockdown.

“I’ve been with my mum the whole time. I’ve loved it but you do start to go a little bit crazy at times, don’t you?”

These two Loose Women stars will act as a pair on The Circle Celebrity 2021.

Kaye says she hopes it will help her get out of her lockdown funk.

She said: “Given that 2020 was a year you had to slog your way through, I felt I just wanted to do something different, to sort of jog myself out of a pretty negative mindset. It sounded a lot of fun.”

While Nadia said: “I love the idea of playing somebody else and hanging out with Kaye, we are like two mischievous sisters. I also love social media. I love it.”

The Only Way Is Essex and Made In Chelsea stars Pete Wicks and Sam Thompson are teaming up for The Circle.

Veterans of reality TV, they’re excited to experience being a catfish.

Pete said: “It’s just such a good concept. Everyone goes on about catfishes, a lot of people have been catfished, or have been used as catfish. So I think it’s just quite a good social experiment, isn’t it?”

Whereas Sam joked: “The reason I’ve done this is because Pete Wicks will be contractually obliged to live with me for six days! That is 95% of the reason I’m doing this, and I’ve always wanted to be a catfish and I get to be now.”

Radio DJS Rickie Haywood-Williams and Melvin Odoom are pairing up for this special series of The Circle.

They’re both massive fans of Big Brother, and are excited to get a taste of reality life for themselves.

Rickie said: “Firstly, when the show first launched, myself and Melvin were just blown away by the concept of it. It was just so of this time, social media and the whole kind of trap that falls around catfishing and things like that. It’s just really fascinating.”

With Melvin adding: “It’s an amazing concept and idea. And it’s the cause, the fact that doing it for Stand Up to Cancer is a great cause as well.”

Channel 4 Stand Up To Cancer The Circle