Could it really happen?

Celebrity Big Brother viewers have been sharing their love for Andrew Brady and Shane J’s friendship.

The pair have formed a close bond since arriving in the house last week – and now some fans have confessed they’re kind of hoping friendship may blossom to romance for the besties.

Andrew is straight and Shane, who also performs as drag queen Courtney Act, is gay.

Some viewers have pointed out Andrew and Shane are basically best pals when Shane is Shane, but when Shane becomes Courtney, then Andrew’s behaviour turns more flirty.

On last night’s episode, Andrew was seen quipping to some of the housemates: “Courtney’s the sexy one you’d want to be at your hotel room when you come back from the eviction.”

One admirer tweeted: “I’m totally hoping Courtney and Andrew fall in love and live happily ever after.”

Another said: “Never wanted two people to get it on more in my life. Andrew and Shane J would make such a pretty couple.”

A third added: “Andrew and Courtney Act will be the relationship of the year. Make it happen!!

And many, many more voiced the similar hope that Andrew and Shane may fall in love. 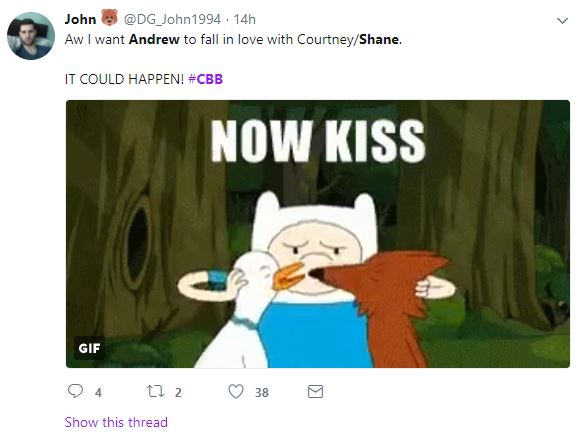 Jonny Mitchell told Courtney: “I reckon you break [Andrew’s] walls down a little bit, metaphorically, not physically. But I reckon you might get somewhere…”

“I think there is a genuine affection between all four of us [Courtney, Jonny, Andrew, Dapper Laughs]. I didn’t think I would appreciate the straight men and boys of the house as much as I would, and there is our laddish group.”

Meanwhile, Shane J spoke on Wednesday night’s episode about how the men treat him differently when he’s Shane and when he’s Courtney.

Shane said: “I do feel like I have a unique experience in how people perceive me, especially with straight men. All the boys said, one by one, when I came down the stairs, ‘Oh who is this?’ kind of thing. It’s fascinating to see how straight men interact with me as Shane and Courtney, and how they do treat me quite differently.”

When Andrew asked Shane if he thinks Andrew treats him differently, Shane said: “You are more flirtatious [when I am Courtney].”

After Andrew started to laugh, Shane continued: “I think understandably so. You are a young, virile man with sexual desires and Courtney is an aesthetically attractive woman!”